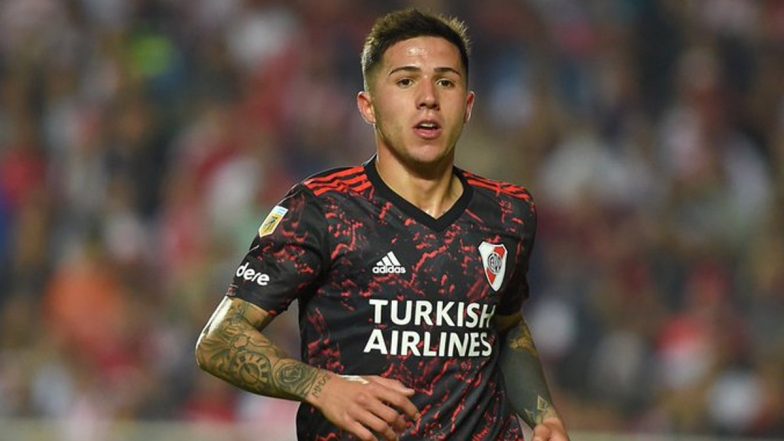 Buenos Aires, June 23: Portuguese club Benfica are close to signing highly-rated River Plate midfielder Enzo Fernandez, according to media reports in Argentina. The Portuguese club has offered to pay 18 million euros for 75 percent of Fernandez’s economic rights, the Ole news outlet reported on Thursday. It added that the 21-year-old would likely remain with the Buenos Aires giants until the European winter. Fernandez has made 49 appearances for River, scoring 11 goals and providing nine assists, since being promoted from the club’s youth academy in 2019. Sadio Mane Transfer News: Liverpool’s Star Forward Joins Bayern Munich.

The former Argentina youth team player has also reportedly attracted the interest of Wolverhampton Wanderers and AC Milan, reports Xinhua. Meanwhile in other transfer news, Southampton are trying to ward off inquiries about James Ward-Prowse, with West Ham joining Manchester City, Manchester United and Tottenham in making a move at the midfielder. Saints have sought 75m for Ward-Prowse. Ajax are keen on taking back Tottenham’s Steven Bergwijn back to the Dutch top tier. Spurs want at least 25m for the winger but the Dutch champions are likely to fulfill that demand as they have a bit of cash in their pocket after the successful transfer of Sebastien Haller to Borussia Dortmund.

(The above story first appeared on Reportr Door on Jun 23, 2022 03:36 PM IST. For more news and updates on politics, world, sports, entertainment and lifestyle, log on to our website reportrdoor.com).