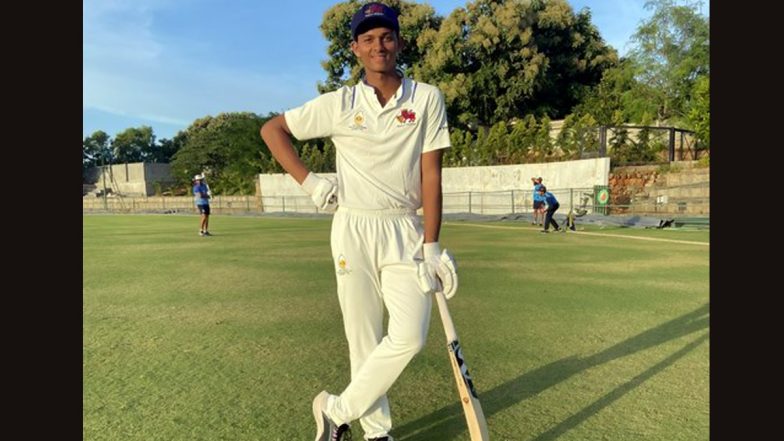 Mumbai, June 23 : Mumbai left-handed batter Yashasvi Jaiswal has credited the tips he got from England batter Jos Buttler during their stint with Rajasthan Royals in Indian Premier League (IPL) 2022. Playing for 41-time champions Mumbai, Jaiswal struck a half-century on the opening day of the Ranji Trophy final against Madhya Pradesh in Bengaluru on Wednesday. Jaiswal said that Buttler, who won the Orange Cap for being the highest-scorer in IPL 2022, advised him to stay focussed and go for his shots at the right time and in the hour of need. Jos Buttler Hails Depth in England Squad, Backs Eoin Morgan As ODI Captain After Netherlands Series Sweep.

“I try to follow his tips, which have helped me. Watch the ball, understand the situation and keep playing good cricketing shots that I follow,” Jaiswal was quoted as saying in a video uploaded on BCCI Domestic’s Twitter handle after the end of the first day’s play. Jaiswal has been in great form going into the final as he struck three centuries in a row against Uttarakhand and Uttar Pradesh respectively. He was looking good for a fourth-century before getting out, caught by Yash Dubey off Anubhav Agarwal.

(The above story first appeared on Reportr Door on Jun 23, 2022 01:21 PM IST. For more news and updates on politics, world, sports, entertainment and lifestyle, log on to our website reportrdoor.com).