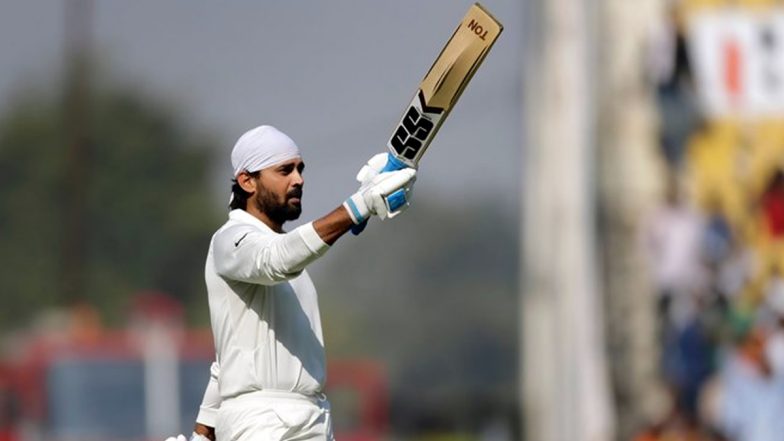 Chennai, June 24 : India cricketer Murali Vijay is not setting himself any targets as he plans a return to the sport to play in the Tamil Nadu Premier League (TNPL) after a nearly two-year hiatus. A veteran of 61 Tests and nearly 4,000 runs in the longest format of the game, Vijay last played a competitive match in the 2020 edition of the Indian Premier League (IPL) for the Chennai Super Kings, and is now set to don the Ruby Trichy Warriors colours in the TNPL this year. Yash Dubey Follows Sarfaraz Khan, Celebrates Century in Sidhu Moosewala Thigh-Slap Style During MP vs Mumbai Ranji Trophy Final (Watch Video).

“The two-year break was to reflect… at the end of the day, you have to be realistic with your targets. I pretty much don’t have any aim at the moment. I just want to play cricket and enjoy this phase of my life at this point and see where it takes me, with the help of TNCA,” said Vijay. “I want to play as long as possible. Just took a personal break. I have a young family and wanted to take care of them. I’m enjoying my cricket now and I’m feeling fit, hopefully, I can do my bit for my team and TNPL,” Vijay said at a TNPL event.

The 38-year-old Vijay added the decision to take a break has also to do with injuries coupled with the fact that his personal life was going at a “fast pace”. “It was difficult for me personally because I wanted to play but I had injuries and my personal life was going at a fast pace. I wanted to slow it down and see where I was standing as an individual. I wanted to reflect on myself and that’s why I felt that a break was required and needed for me at that particular time. TNCA has understood that and they’ve given me this beautiful platform to come back and play the game.” KS Bharat Scores Half-Century During India vs Leicestershire Warm-Up Game.

Murali, who enjoyed several productive seasons in the IPL scoring 400-plus runs in three seasons, had seen his form dip in his last couple of years in the lucrative league. But now he wants to make the most of the opportunities that come his way and also help the youngsters in the TNPL. “Just go out there and perform and make use of the opportunity. How many youngsters I can help out and be with them — that’s going to be my role in this team in TNPL. That’s what I’m looking forward to — to rub shoulders with the youngsters and talk the way they can understand and see where they are and contribute to TNPL,” added Vijay.

(The above story first appeared on Reportr Door on Jun 24, 2022 01:08 PM IST. For more news and updates on politics, world, sports, entertainment and lifestyle, log on to our website reportrdoor.com).