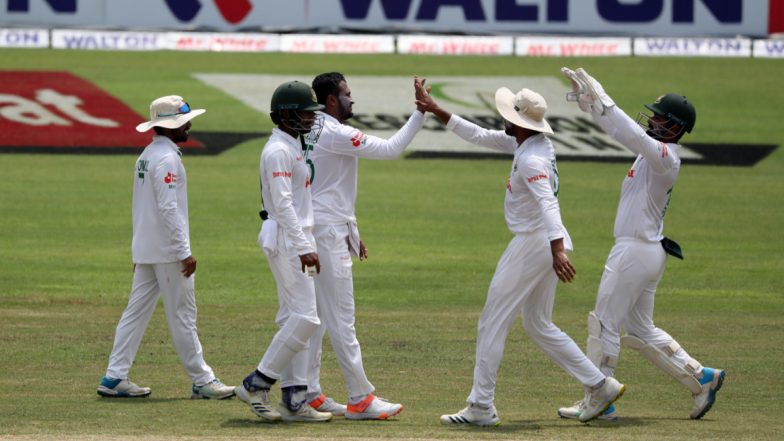 The final test of the two-match series between West Indies (WI) and Bangladesh (BAN) will begin from 24 June, 2022. The match will be played at Daren Sammy Cricket Ground in Saint Lucia and shall commence from 07:30 PM IST. Meanwhile fans searching for Dream11 Team Prediction for WI vs BAN second test clash can scroll down below for all the tips and suggestions on compiling the fantasy playing XI. England vs New Zealand 3rd Test, Day 1: Daryl Mitchell Helps Kiwis Finish on 225/5.

West Indies had a smooth win over Bangladesh in the first test on the fourth day by 7 wickets. While batting, Bangladesh made a paltry score of just 103 runs in the first innings thanks to some magnificent spells by Jayden Seales 3/33 (10) and Alzarri Joseph 3/33 (8.5) from WI. Hosts in their first innings were restricted to 265 all out, with Kraige Braithwaite remaining the top scorer (94). Later while Bangladesh batted in their second innings, the visitors scored 245 for all out, which set a target of just 88 runs for WI. Hosts chased down the target in 22 overs, aided by John Campbell’s heroics after the demolition of the top order early in the game by Khaled Ahmed, who took three wickets in his first two overs.

WI vs BAN, Dream11 Team Prediction: Wicket-keepers – Litton Das (BAN) could be taken as our wicket-keeper.

Shakib Al Hasan (BAN) could be named as the captain of your WI vs BAN Dream11 Fantasy Team, while as Kraigg Braithwaite (WI) could be selected as the Vice-captain.

(The above story first appeared on Reportr Door on Jun 24, 2022 09:42 AM IST. For more news and updates on politics, world, sports, entertainment and lifestyle, log on to our website reportrdoor.com).