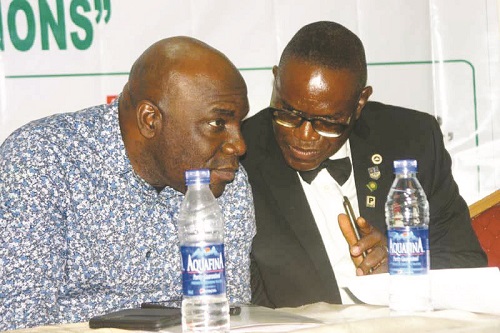 As the 2023 general elections draw nearer, with tension across the political parties, the media has been charged not to allow anybody or groups to lure nor cow them into any act capable of tarnishing the nobility of their profession. TOBA AGBOOLA reports.

Labour experts believe that politicians seeking votes have dismissed the relevance of journalists in the electoral process.

They urged journalists not to be discouraged but rather they should set an agenda for transformational leadership ahead of the 2023 general election for a better Nigeria.

Equally, the media professionals were cautioned against accepting Greek gifts from any person(s) in any guise, who may come in different portfolios claiming to be angels and apostles of good tidings; meanwhile they are wolves in sheep’s clothing, sent to destroy Nigeria’s democracy.

At a media workshop put together by the Labour Writers Association of Nigeria (LAWAN) and the Fredrich Ebert Stiftung (FES), in Lagos recently, heavyweights in the media industry warned again that this is a period when political moneybags would do everything humanly possible to influence journalistic works in other to achieve a sinister end.

With the theme: “The Role of Media In Setting Agenda for 2023 Election”, they reminded journalists of their roles of holding government at all levels accountable to the people at all times, and to foster and engender good governance.

Speaking at the event, Director, International Press Centre, IPC, Comrade Lanre Arogundade, advised Nigerian workers, as well as their labour unions, not to be used as cannon-fodders by selfish and greedy politicians. Cannon-fodders are regarded merely as materials to be expended in war.

He warned workers to refrain from serving as foot-soldiers of political parties or as party thugs during elections.

According to him, workers must contribute to democratic accountability by documenting labour-workers-related campaign promises with a view to holding politicians accountable to their promises.

“Politicians must be held responsible for their campaign promises, especially as they relate to labour sector while generally-highlighting the roles of labour and workers in peaceful elections.”

Labour writers, he noted, must continue to sensitise the public on the importance of PVC collections and voting by workers while drawing the attention of the Independent National Electoral Commission, INEC, and also State Independent Electoral Commission, SIEC, to the needs of disadvantaged Nigerian workers, such as those living with disabilities.

In the same vein, Arogundade urged the Labour writers to work with the Nigeria Labour Congress, NLC, and Trade Union Congress, TUC, to organise political debates for presidential and governorship candidates on labour-related issues.

“Labour journalists working in the broadcast media should create election programmes focusing on the issues of workers in 2023 general elections”, he stated.

Arogundade said the campaign promises must not end after the elections in 2023, but should be followed-up and encourage workers to seek for the fulfillment of those promises, stressing that journalists should publish those promises in a booklet.

In her submission at the workshop, the former Labour Editor, Vanguard Media Limited, Mrs. Funmi Komolafe, said the role of the media pre-dated the election day and must begin with party primaries, where candidates are elected or appointed to choose their flag bearers.

Delivering her lecture on “The role of the media in ensuring peaceful, credible, transparent and inclusive general elections in 2023”, she noted that journalists must report  campaign activities without being carried away by activities of politicians.

In Nigeria, she said, the media tends to focus on the number of people at the rally, instead of the real political message.

Her words, “It is, therefore, common to see headlines like “mammoth crowd and massive turn-out”, saying such headlines did not reflect objective reporting.

She, however, noted that, as the 2023 general elections approached, Nigerian journalist needed to ask in whose interest he or she is reporting?.

“We must remember that we have a duty to ensure that the interest of our nation should be our focus. We should desist from unnecessary sensationalism that promotes ethnicity and religious divide” she added.

Human Right Activist and a Lawyer Barrister Wale Ogunade said media has made attempts towards effecting processes that would result in what can be perceived as the most important discourse on issues that would affect the society, influence and establish the spate of news occurrence.

He said agenda setting has formed a cardinal component of public opinion and accurate evaluation of such news has become important to public policy consideration.

His words: “The media has a gate-keeping function and exclusive capacity to control what is reported.

“It must be noted that for the country to remain afloat, journalists must deliver on the responsibility of holding government accountable to the people.

“The media is expected to listen to what the politicians are saying and draw a conclusion as to the reality on ground, a journalist should stay by the sacred principles of the profession to avoid misinformation.

“The media must ensure that it is that person that would take us out of the woods that would emerge as president in 2023.

Ayu who was represented by the National Publicity Secretary of the party, Hon Debo Ologunagba said the party’s covenant with Nigerians is to prioritise efforts in creating a very robust economic development agenda to revamp the ailing productive sectors, stimulate multi-sectoral productivity and best conditions of service that guarantee job security, training and capacity building; competitive remuneration as well as reliable retirement and pension scheme for workers in both the public and private sectors.