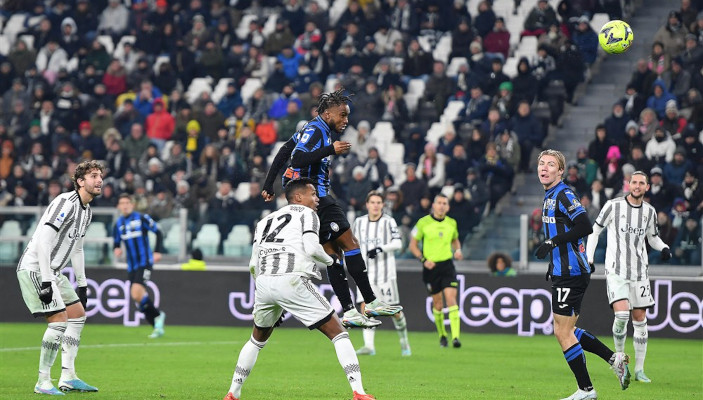 Super Eagles forward Ademola Lookman has continued his inspired goalscoring form for Atalanta, as he scored a brace in an exciting 3-3 draw with Juventus at the Allianz Stadium on Sunday night.

Still basking in the euphoria from last weekend’s history-making 8-2 home win over Salernitana, Atalanta hit the ground running from the get-go. Gian Piero Gasperini’s men didn’t have to wait long to open the scoring, with Ademola Lookman beating Wojciech Szczesny from an acute angle only four minutes into the game.

Juventus’ goalkeeper gifted the goal away to Lookman, who became the first Atalanta player to score 10+ goals after 19 matches in their first top-flight season. He currently sits second behind compatriot Victor Osimhen (13) in the Serie A scoring charts with 11 goals

However, La Dea could only cling to that slender lead for 20 minutes.  Nicolò Fagioli went down inside the box after a reckless challenge from the opposition defender in the 23rd minute. Although referee Livio Marinelli refused to point to the spot at first look, he overturned his initial decision after consulting with the side-pitch monitor.

Angel Di Maria stepped up to take the penalty. The Argentine sent his compatriot Juan Musso the wrong way to put things back to square one.

Action was back and forth midway through the first half, with Juventus coming out on top on the back of Arkadiusz Milik. Fagioli, who drew a penalty, whipped a delightful cross into the box, with the Polish striker hammering the ball first time with class and purpose to complete the turnaround in the 34th minute.

As has often been the case under Massimiliano Allegri, Juventus automatically dropped back to defend a narrow lead.  They came close to regretting that choice in the 40th minute as Jeremie Boga found some space for himself on the edge of the box, but the finish let him down.

Despite carrying a 2-1 lead into halftime, Juventus soon realized a conservative approach would lead them nowhere against a rampant Atalanta side. After breaking the deadlock early in the first half, Lookman enjoyed a blistering start to the second half. The in-form winger sent in a cross, with Joakim Maehle slipping Danilo’s mark to draw Atalanta level only one minute after the break.

It was just a sign of things to come. Lookman refused to rest on his laurels as he outjumped his man, heading home Boga’s inch-perfect cross to bring Atalanta back in front in the 53rd minute.

Though it looked like Juventus could lose control of the game after falling behind for the second time in this match, Allegri’s troops regrouped in no time. Marten De Roon made a silly challenge on the edge of the box in the 63rd minute, presenting Juventus with a golden chance to claw their way back into the game. And the Bianconeri seized the opportunity clinically. Di Maria played a clever dummy pass to Danilo, who unleashed a thunderbolt into the bottom corner to restore parity.

Both sides had their chances to win the match in the remaining half an hour of play but eventually had to settle for a share of the spoils. However, it’s fair to say the Allianz Stadium crowd witnessed arguably the most exciting fixture of the 2022/23 Serie A season.