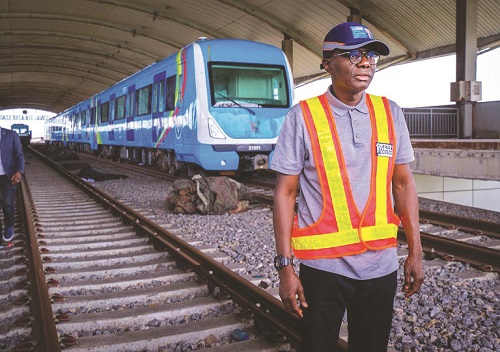 As the delivery of the two legacy rail lines by the Lagos State Government gets closer, ADEYINKA ADERIBIGBE writes on why residents must avoid interfering with the Blue Line Rail

Barring unforeseen circumstances, the Lagos State Government, by first quarter 2023, will take modernised train inclusion (as an element of intermodal mass transit) notches higher, with the delivery of the Blue and Red Rail Lines.

The Babajide Sanwo-Olu-led administration, at the seventh Ehingbeti Economic Summit, unveiled the Lagos State 30-year Economic Master plan, that replaced the 20-year Master plan (put in place by former Governor Asiwaju Bola Ahmed Tinubu, which rounded off this year). He is upbeat of his place in history. His luck it is, to, like the Israelites, take Lagosians to the promised land that had seen them wallow in the “wilderness” for 40 years, since the dream of a metroline was first conceived by the Second Republic Governor, the late Alhaji Lateef Jakande, in 1983. Instructively, Lagos State would become the first sub-national, not only in Nigeria, but Africa, and among fewer still in the world, to fully own and operate metro rail lines.

This is besides its ambitious steps to add air and sea ports to be located in Lekki and Badagry to the bargain. These, again, makes it the first state to fully and actively play in major modes of transportation in the country.

The state’s journey into rail ownership began with the construction of the Blue Line in 2002. Meant to be the flagship of its intervention in public sector transportation, that would on completion complement the Bus Rapid Transit (BRT), which began commercial operation on March 17, 2008.

The project, which was supposed to be delivered in 2012 had suffered serial hiccups chiefly, due to official tardiness and paucity of fund.

However, the project received last year, a new gust of air, and finally, after 20 years, the Blue Line which almost became moribund was revitalised.

Former Governor Babatunde Fashola, at the Lagos Traffic Radio yearly summit in 2019, had challenged the new administration to actualise the project to serve as launch pad for the remaining five rail corridors.

For keeping the state waiting for 20 years, the Sanwo-Olu administration would be delivering two – the Blue and Red lines to the people.

While the first phase of the Red line would run alongside the main Nigerian Railway Corporation (NRC) corridor, from Agbado – Oyingbo, with two works yards at Oyingbo and Agbado, the Blue Line, which would run across the Lagoon, from Mile 2 to Marina.

The first set of electric locomotive and coaches had been purchased by former Governor Babajide Fashola, who had taken the project to about 80 percent completion before handing over to his successor, in 2015, while the Sanwo-Olu administration who made its delivery a sacral duty, took delivery of more rolling stock. Construction on the corridor is at about 90 per cent completion as at last weekend when the Lagos State Metropolitan Area Transportation Authority (LAMATA) Managing Director Engr Abimbola Akinajo and her team, monitored the project.

The LAMATA Chief was satisfied with the pace of work on the Blue line, noting that work is going according to schedule and the timeline for a test run by December remains feasible.

With the imminence of its completion, Mrs Akinajo activated the next phase, which was massive enlightenment for citizen’s expectations on the Blue line corridor.

Of particular concern to Mrs Akinajo is safety. Because the Blue Line is electrified, aggressive enlightenment must begin to reduce human interference/impact with the rail corridor. To forestall this, a fence has been constructed by the state government to protect the entire Blue Line right of way, from Mile 2 to Marina. According to her, places especially Mile 2, Orile, Agboju, and other densely populated communities around the rail corridor had been completely fenced off. She warned against people cutting through the fence and running across the rail corridor.

“While these acts may seem safe for now, it would be suicidal once operation commences, as the corridor would be electrified and could lead to electrocution and instant death,” Akinajo said.

To give more verve to the clarion, she made a two minute video which adumbrated the danger of human impact of the Blue rail line.

She said electric options remained the way to go in view of the massive global agitation for cleaner energy and to cut down on emission of GreenHouse Gases (GHG) which has over time proved dangerous to the environment leading to climate change.

According to her, while the Red Line would be propelled by Diesel, the Blue Line would be activated by about 700Kva of electricity, thus making human impact on the corridor suicidal.

According to Wikipedia an electric locomotive is a locomotive powered by electricity from overhead lines, a third rail or on-board energy storage such as a battery or a super capacitor.

Though there is no indication that the rolling stock would be powered by overhead lines, or by a third rail or an on-board energy storage battery or super capacitor.

Electric locomotives Wikipedia further stated are ideal for commuter rail service with frequent stops. Electric locomotives are used on freight routes with consistently high traffic volumes, or in areas with advanced rail networks. Power plants, even if they burn fossil fuels, are far cleaner than mobile sources such as locomotive engines. The power can also come from low-carbon or renewable sources, including geothermal power, hydroelectric power, biomass, solar power, nuclear power and wind turbines. Electric locomotives usually cost 20% less than diesel locomotives, their maintenance costs are 25-35% lower, and cost up to 50% less to run.

The chief disadvantage of electrification is the high cost for infrastructure: overhead lines or third rail, substations, and control systems.