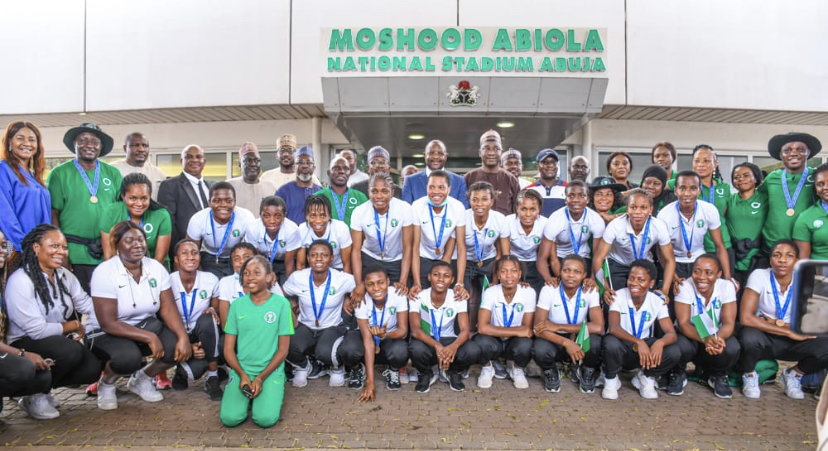 The Minister of Youth and Sports Development, Sunday Dare, has said the Federal Government will organise a befitting and special reception for the national female U17 team, the Flamingos for their winning the bronze medal at the just concluded FIFA U17 Women’s which was held in India.

Receiving the Coach Bankole Olowookere-led team at the VIP section of the Moshood Abiola National Stadium, Abuja on Tuesday, Dare thanked the team for their efforts and for bringing honour to Nigeria and put smiles on the faces of millions of Nigeria. He said the President at the appropriate time will host the team and reward them for their exploits in India saying their efforts will not go unnoticed.

According to Dare, the Flamingos displayed the true spirit of sportsmanship during the competition as no one was in doubt about the talents at the disposal of the team and their skills they showed to the entire world in India. He thanked the NFF for preparing the team, organised them very well and provided the logistics that made them succeed during and after the tournament.

“As a ministry, we will approach Mr President. We would seek an appointment for you to meet with Mr President and he would thank you officially on behalf of the country when he returns.

“Also you know that when you meet with the father and you’ve done well, there will be some reward. I’m not going to preempt Mr President but I can assure you will get that visit, you will get that presidential handshake and you will get reward for your exploit.

“It’s first of its kind in our history. I must also commend the NFF for the preparations, for the organisations, for making sure that you went through the right of passage; the qualifiers, sending you to Turkey and get all the logistics that went with it. But I think the biggest thanks go to the technical crew. I saw that your coach Banky became a prayer warrior and that infected almost all the members of the team.

You see the NFF president talking to me, we want to see a graduation from this level to the next level because you have the skills, you have the talents and you will continue to be part of our national team,” the minister said.

Coach Olowookere and team captain, Alvine Dah-Zossu, during interviews with Tribune Sports thanked Nigeria for their support and promise to always give their best and make Nigeria proud.

The chairman Task Force for Age Grade Teams, Alhaji Balele Kurfi who announced a personal donation of $10,000 for the team saying he will continue to support and encourage all the age grade teams to give their best to the country.