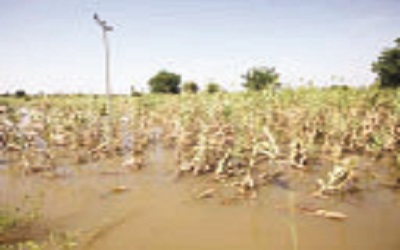 Stakeholders within and outside the insurance sector have highlighted fraudulent activities and irregularities in the chain of operations in agricultural business. Omobola Tolu-Kusimo writes that this and many more issues stand against the goals of President Muhammadu Buhari’s achievement of food security in the country.

For all you care, a lot of fraudulent activities have been going on in the chains of agriculture business in the country, especially under the Anchor Borrowers Programme.

Findings have revealed that banks as lenders under the Anchor Borrowers Programme granted loans to farmers with ghost farms who continue in the fraudulent act to insure the non-existent farm with insurers and in turn make false claims in billions of naira.

Cartels have been formed in a conspiracy that involves stakeholders from banks to farmers, input producers, insurers and other service providers.

The bandwagon is being pushed on to reinsurers who are moving to stop the menace. Reinsurers are meant to pay claims transferred to them by insurers.

To this end, the lead reinsurer of agric insurance business in Nigeria, Africa Reinsurance Corporation, has taken the bold step by leading conversations and trying to set standards with insurance.

The reinsurer organised a three-day workshop with the theme: “Challenges and Opportunities of Agricultural Insurance in Nigeria” at Lakowe Lakes and Resorts with participants drawn from the banks and other finance institutions, insurance companies, technology providers, key government institutions and farmers’ representatives.

For three days, they were challenged to discuss and proffer solutions to issues such as how they can leverage respective strengths while aligning interest of partners; challenges and threats confronting Agriculture insurance; Is there a business case for agriculture insurance in Nigeria; Whose responsibility is it and who else needs to be involved; Where do they see opportunities and how can they take advantage of them; Investments required and where resources are needed; and Where should the focus be? farmers, financing, food security, climate change.

The banks are giving out loans to farmers but the farms do not exist. Experts are urging the banks to do more due diligence to forestall and block the loopholes that have been encouraging these acts.

It was gathered that there are measures put in place by the Central Bank of Nigeria (CBN) for banks to comply with before they can give out loans to farmers. Feasibility studies, farm identification and project monitoring are to be carried out before funds can be released to a farmer.

Yet, some self-proclaimed farmers get the loans but do not have farms. Thus, the funds are never utilised for food generation and security as are the goals of President Muhammadu Buhari.

An insurer recounts: “We had a terrible experience six months ago where a bank wanted to insure 36 farmers for 246 hectares of farm and they wanted an Area-yield index insurance policy. We had a chat with them where we proposed to them that indemnity cover policy is better for them as against area yield policy. They accepted and the next thing they dropped a cheque for us to pay into our account.

“But we insisted on inspecting the farm before we can pay the cheque into our account. They began giving us different excuses on why we can’t go to the farm. At one point, they told us that the farm manager has travelled out of the country and we were waiting for six months. We dragged it for these six months with cheque lying in our office. We then told them that would return the cheque if they would not take us to the farm. We also told them that we would write a letter in this regard and copy CBN. It was at this point that they agreed to take us there. Along the way, they opened up that the farmer and farm did not exist.

“These are the things that we see. If we have held on to the cheque longer and the kind of flood that we are experiencing in the country begin, they will claim that flood has washed away the farm that never existed. This is how we end up paying billions of fraudulent claims. If we have also returned the cheque with the letter, they will begin to blackmail us with stories different from what actually happened”, the underwriter added.

“We wrote to the farmer because this time around, the farmer was directly involved with us. We told him our manager said the farm was 10 hectares but the farmer kept telling us that he doesn’t know what the manager was saying and that we should send another person. And because he insisted, we decided to send a bigger team for the inspection. Eventually when we got there, we found that it was 10 hectares and it was at this point that he started begging us not to expose him. He said if we write on what we found, CBN will ask them to refund the money.

“These are the things that we see. This is where the financial institutions come to play. We are saying that if the banks did the feasibility studies, farm identification and monitoring, how did farmers that never had farms get the money in the first place. But the banks claim that they do monitoring on farms that never existed. So, the banks have a lot to do for us. We need to work with them for everything to work well. Their sincerity will help the insurance industry not to pay fraudulent claims” the insurer maintained.

Yet another experience: “We are presently confronted by a very difficult situation in the insurance industry. There are so many fraudulent claims that are coming that we know that are purely fraudulent. The examples are massive especially for poultry. we need to find a way in this forum to see what we can do to resolve issues of moral hazards.

“For example, we have issues of farmers taking credit and not deploying into the farm and asking for claim. Many times, we don’t even know where the farm is in the first place. I had a personal experience where a farmer told us that he had 10,000 hectares of wheat farm and at the end of the day when we got there, it was 1300 hectares of wheat. If I had gone ahead to ensure 10000, I would have been out of job because they would have made claims in billions. I believe this is a major problem that we must work against as risk managers”, he added.

The insurer said they also have issues of rate cutting that is hindering services provided to the farmers.

“We have issues of inadequate risk analysis and pricing. We are made to reduce rates beyond what should be acceptable. Agric insurance is the cheapest policy in Nigeria and in the world. For example, banks and farmers buy our policy to cover over 40 risk including fire, lightning, pest and diseases and everything in all combined together and at the end we charge the rate two per cent or three per cent. In other climes, they will price per risk and do a risk analysis of the price in order to charge adequate premium”, he noted.

A banker, however, said people are not favorable to insurance because the general opinion is that when it is time to pay claims, insurance companies start looking for excuses not to pay.

“As a bank, we funded many farmers and they don’t really get much in terms of claims payments.

“This makes us to question the necessity of taking insurance and whether or not we should encourage farmers to buy insurance”.

The banker said they also observed that farmers do not understand Area Yield Policy and it appears that they are being forced to by the product.

She advised that farmers should be allowed to make their choice between Area Yield cover and Indemnity cover.

With Area-yield index insurance, the indemnity is based on the realised (harvested) average yield of an area such as a county or district. The insured yield is established as a percentage of the average yield for the area (typically 50–90 percent of the area average yield).

An indemnity is paid if the realised average yield for the area is less than the insured yield, regardless of the actual yield on a policyholder’s farm. This type of index insurance requires historical area yield data on which the normal average yield and insured yield can be established.

Nigeria is well endowed for agriculture. It has 70.8 million hectares of agricultural land with less than 50 per cent in use. It also has varied ecology that supports sustainable cultivation of various crops and animal husbandry; Natural aquifers for all year-round production; and Convertible underground water for irrigation.

In terms of Labour, it has huge supply of labour with over 90 million population aged 15-65 years. The country has huge consumer market with unsatisfied demand.

Nigeria has the largest economy in Africa with a population of 200 million people. Agriculture contributes 30 per cent of GDP and employs 35 per cent of the population against global average 28 per cent.

Africa Re said it will do right even if no one is doing it hence its determination to grow standards and capacity in the Nigerian agricultural space.

He stated that the workshop was aimed at providing a platform for candid conversations with a view to developing homegrown solutions to move the agriculture sector in Nigeria to the next level.

“In line with our mission to support the development of African economies including that of our beloved country Nigeria, Africa Re recognises significance of the agriculture sector in fulfilling the aspirations of many farming households. “Therefore, our team endeavours to work with likeminded partners, like yourselves, to make the agriculture class of insurance business a significant contributor to the ambition of increasing insurance penetration in Nigeria and indeed the entire region.  At Africa Re, we are deliberate about leveraging our wide range of expertise and knowledge, backed by solid financial strength, to provide the much needed reinsurance capacity in the agriculture sector.

“Over the last five years, the market has seen exponential growth in insurance premiums from agriculture, but this growth has been overshadowed by the unfavourable loss of experience. This poor performance reveals the need for the market to invest more in stakeholder engagement including training, aimed at improving underwriting skills as well as claims handling capabilities. Whereas a lot of work has already been done in addressing some of these challenges, Africa Re recognises the need for continuous improvement especially during this ever-changing business environment and hopes that this workshop will help to move all stakeholders towards the desired objectives”, he noted.

Speaking on what Africa Re has learnt in the course of its development agenda for the insurance industry and the country as a whole, Manager, Agricultural Underwriting and Marketing, Africa Re, Isaac Magina said the role of government in promoting agric insurance goes beyond providing financial incentives

He stated that policy and legal framework are necessary to sustain operations ecosystems while there is need for governments to encourage stakeholder engagement and support homegrown solutions.

“There is also need for regulatory and oversite role that will engender confidence building for all participants in the agric business and capacity building and training that includes product information and financial literacy viewed as a public investment.

“Government should help with central coordination and alignment of goals for all stakeholders like farmers, insurers, service providers, NGO’s, financial institutions, development partners, government agencies. There is also need for coordinated approach to collection, storage and access of requisite agriculture insurance data, including weather and yield data”, he pointed out.