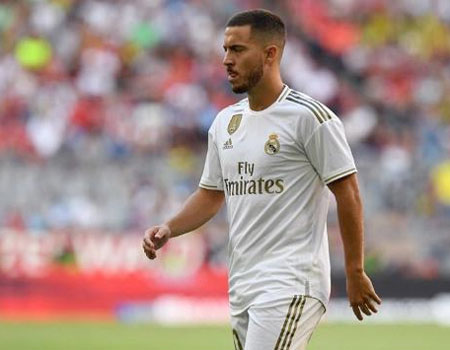 Eden Hazard has apologised to Real Madrid fans for failing to live up to expectations since joining the club, saying he’s “really sorry about what has happened” and would accept a move away next summer.

Hazard, 31 — who is currently with Belgium preparing for the World Cup in Qatar — joined Madrid in a high-profile move from Chelsea in 2019 for an initial €100 million but has since endured an injury-hit three years at the Bernabeu.

Despite being fully fit and available this season, he has made just three LaLiga appearances for Madrid, two of them as a substitute, with his preferred left-wing position occupied by rising star Vinicius Junior.

“I’m sorry. I’m trying, but … I’m sorry,” Hazard told Marca in an interview published on Wednesday. “I have one more year and I have to show [what I can do] but it isn’t easy. I’m not playing, I want to play more. I’m really sorry about what has happened.”

Hazard’s contract at Real Madrid is due to expire in June 2024, but his lack of game time has led to speculation that he could leave during the upcoming January transfer window.

“In January it’s impossible, because I have my family and I like the city,” he said. “But in the summer it’s possible that I leave. I have a year left on my contract and it’s a decision for the club. If the club says ‘Eden, thanks for these four years, but you have to go’ I’ll have to accept it.”

Hazard left Chelsea in 2019 as one of the Premier League’s best players but his first season in Madrid was marred by an ankle fracture which eventually required surgery and the insertion of a metal plate in March 2020, which led to further, ongoing problems before its removal two years later.

“The first [injury] was after playing against Paris Saint-Germain and the second came almost three months later,” Hazard told Marca. “They were two fractures… [The next problem] was different, because it was an infection with the metal plate.

“I wanted to have an operation sooner … but the club said ‘It’s impossible, you have to stay calm, we’ve spoken to the doctors, it’s not a problem with the plate.’ But the third year it was the same: injury, injury … I’m not saying it was the fault of the club, the doctor or the operation; I want to say it was many things.”

In May this year, Hazard told fans during Madrid’s Champions League winning celebrations that he would “give everything” to make an impact this season, but his opportunities have again been limited.

“[I’d give myself] a zero in terms of playing, because I haven’t played,” he said, when asked to grade his time at Madrid. “But a 10 in terms of how I feel in this moment with the team. I’m not playing, but being a Real Madrid player was my dream as a kid. I want to play for this club.”