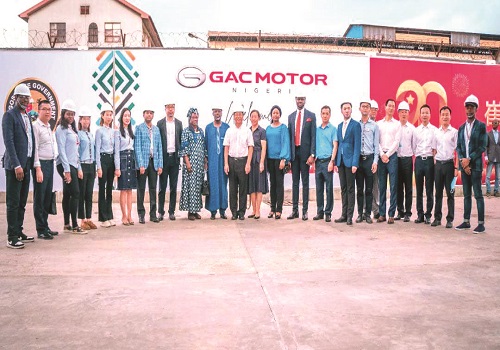 Chinese Ambassador to Nigeria, Cui Jianchun, has reaffirmed China’s willingness to provide support to innovations such as the newly built GAC auto assembly plant in Ogba, Lagos. He stated this during his visit to the facility.

According to the ambassador, such innovation is seen as fulfilment of “China-Africa bilateral industrial capacity cooperation pact with Nigeria”.

The ambassador, who toured the facility in company of a representative of the Nigerian Minister of Foreign Affairs, Mohammad Tunde Mukaila, and others top government and Chinese embassy officials, was impressed with the auto facility which is a Joint Venture Agreement (JVA) between the Lagos State Government and CIG Motors Co Limited.

It would be recalled that, the Nigerian automobile industry had been beset with growth stagnation, constantly plagued by inconsistent government policies regarding investments in this sector; both in terms of fiscal and importation policies, resulting in influx of used, rickety vehicles, accounting for about two thirds of vehicles on the road.

According to the Chairman of CIG Motors, Chief Diana Chen, CIG Motors has carefully studied the automobile market and met with key stakeholders to partner, with the purpose of reviving the sector, through the establishment of a world class automobile assembly plant in Nigeria; that will annually produce a minimum of 5,000 vehicles to meet market demands, and redefine the sector.

It would be recalled that this partnership was strategically sealed in Guangzhou, between the Chairman of Choice International Group – Chief Diana Chen, Governor of Lagos State, Mr Babajide Sanwo Olu, and Mr. Zeng Qinghong – The Chairman of GAC Motors Group, in December 2019.

In July 2021, the project was locally approved for execution and construction commenced in October 2021. The project industrial area covers a total of 35,000 square meters, and the automobile production line covers an area of 4,800 square meters.

The installation of the plants and machinery for the production line took only seven months to complete, and was supervised by world class engineers, with local employee benefiting from hands on vocational training of the processes involved.

CIG stated that “this reaffirms the credibility and commitment of CIG Motors towards the sustainable economic development of the nation. Aside meeting present needs of modern automobile solutions for the citizenry, GAC Motors has futuristic plans of placing Nigeria amongst key players in the global campaign of eco-friendly production, by veering into production of electric vehicles with dual usage of CNG.

“This will further contribute to the nation’s strategy to run a non-oil economy in the near future, as well as boost foreign exchange policy. The current assembly plant is projected to double production within five years, creating thousands of jobs in the process, while serving as a vocational training institute for mechanically inclined young Nigerians who seek to pursue a career in mechatronics”.

The delegation was overly impressed by the progress and automation of the factory and commended key players of the partnerships not to relent in their vision for industrialisation of the automobile industry.