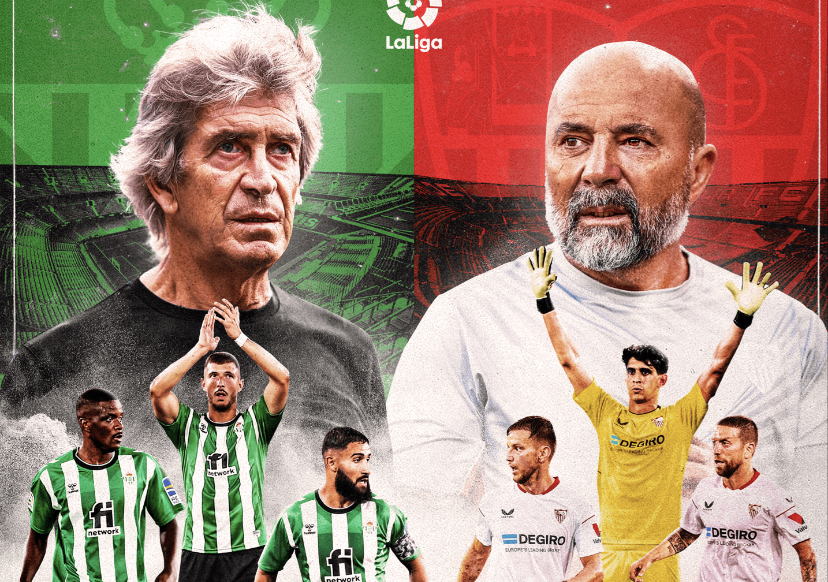 One of the most fiery and passionate fixtures in world football is coming up this weekend in LaLiga Santander: the first El Gran Derbi of the season.

Real Betis and Sevilla FC will resume their special rivalry in the Andalusian capital on Sunday night and this is a match that always lives up to the billing. There is also a capital city derby on Monday, in Rayo Vallecano vs Real Madrid, as well as several other interesting fixtures across the weekend.

The first of the weekend’s matches takes place at Girona FC’s Estadi Montilivi, as the Catalan side look to build on last weekend’s impressive draw at the Bernabéu when hosting Athletic Club. Even though Girona FC drew with league leaders Real Madrid last weekend, they haven’t actually won any of their past seven games so will be targeting a three-point haul against Los Leones.

Saturday starts with some direct duels between teams whose primary objective for the 2022/23 season is to avoid relegation, with Getafe CF vs Cádiz CF and Real Valladolid vs Elche CF. In the first fixture, both sides arrive on a high after securing victories last round, whereas the Pucela and Franjiverdes both suffered losses las time out. In the case of Elche CF, they’re still winless and will hope to secure that much-needed first victory in Valladolid.

RC Celta vs CA Osasuna follows and the Galician side hope to emerge from their recent slump in front of their own fans. They have lost four and drawn one of their past five, but RC Celta have won this fixture in each of the past two years and will hope for a third home win over the Navarre team in a row this Saturday.

On Saturday night, FC Barcelona are back in action and will know they can at least temporarily go top of the standings if they defeat UD Almería at the Camp Nou. Xavi’s side will be confident of doing so given that they’ve won five home league games in a row without conceding a single goal, while UD Almería have lost five away league games in a row, scoring just twice in that run.

The first of Sunday’s games sees Atlético de Madrid look to bounce back from a poor run of results when they host RCD Espanyol at the Estadio Cívitas Metropolitano. When these teams met last season, Atleti triumphed 2-1 both times and on both occasions the winning goal came after 98 minutes of play. So, this weekend there could be even more stoppage time drama, which has been a theme of Atleti’s recent games.

Real Sociedad vs Valencia CF follows that and this should be a fascinating tactical duel as these are the LaLiga Santander sides with the third-most and fourth-most possession. It’ll be interesting to see which outfit is able to take control of the ball on Sunday afternoon in this contest that could have a big say on European qualification.

Villarreal CF then have the last of their home games at the Estadi Ciutat de València, where they have been playing temporarily while work is carried out on their own Estadio de la Cerámica. They and new coach Quique Setién will want to bid farewell to the ground with a victory when they take on RCD Mallorca.

Then, at 9pm CET on Sunday night, it’s one of the biggest games of the year as Real Betis face Sevilla FC in El Gran Derbi at the Estadio Benito Villamarín. This is always a footballing spectacle and it will be once again, even if these two teams are at different ends of the LaLiga Santander table.

With talents such as Nabil Fekir, Sergio Canales and Borja Iglesias in the home side’s ranks, with others such as Ivan Rakitić, Erik Lamela and Papu Gómez in the away squad and with two homegrown captains in Joaquín and Jesús Navas, this has all the ingredients to be a thriller.

Real Madrid then play in the Monday night game of Matchday 13, when they’ll make the short trip to the Vallecas neighbourhood of Spain’s capital to take on Rayo Vallecano. That won’t be an easy game for Los Blancos, as Andoni Iraola’s Rayo side are a very well-organised unit and are undefeated in four matches. They have players like Sergio Camello, Isi Palazón and Radamel Falcao who will shoot on sight, so Thibaut Courtois and his defence will have to be alert in this capital city clash.