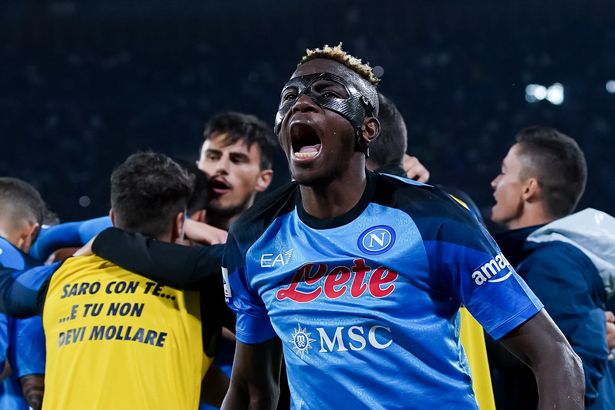 Napoli striker, Victor Osimhen is of interest to Manchester United as they draft up their long and shortlists of goalscoring targets next year.

Osimhen, 23, is the top scorer in Serie A and has plundered nine goals in 13 games this season for Napoli, who are top of the Italian league.

Nigeria international Osimhen is a club-record signing and contracted to Napoli until 2025 but the Neapolitans will come under pressure to sell if he enters the last two years of his contract.

Napoli finally sold Kalidou Koulibaly in the summer to Chelsea for £33million yet he was valued in excess of £100m three years ago. Their most expensive departures have been strikers Gonzalo Higuain and Edinson Cavani.

Osimhen appeals to United as he has thrived in two of the major European leagues, having played in Ligue 1 with Lille prior to his €80m transfer to Napoli in 2020.

Sources have told the Manchester Evening News United are continuing to compile long and shortlists of targets as part of their recruitment process.

Figures at United concede they have a surfeit of right-footed left wingers, which partly influenced manager Erik ten Hag’s recommendation of the left-footed Antony.

There is already a growing clamour among the United fanbase to sign a forward in the January transfer window but the club’s preference is to start the next phase of their rebuild in the summer.

It would be nigh-on impossible to extract Osimhen mid-season as Napoli are unbeaten and eight points clear, having also topped their Champions League group. Napoli’s only titles remain the two won under the influence of Diego Maradona in 1987 and 1990.

There is added pressure on United to have an attainable shortlist of targets as a number of elite clubs are expected to be in the market for a goalscorer next year.

Bayern Munich did not directly replace Robert Lewandowski, Pierre-Emerick Aubameyang is only a stop-gap at Chelsea and Harry Kane’s future at Tottenham is unclear as he approaches the last 18 months of his contract.

United have scored a meagre 18 goals in 13 Premier League games – fewer than Fulham, Brighton, Brentford, Leeds and Leicester – and they finished second in their Europa League group stage on goal difference.

Ten Hag’s side failed to get the second goal they needed to top Group E last week against Real Sociedad, where Alejandro Garnacho’s winner was United’s only attempt on target.