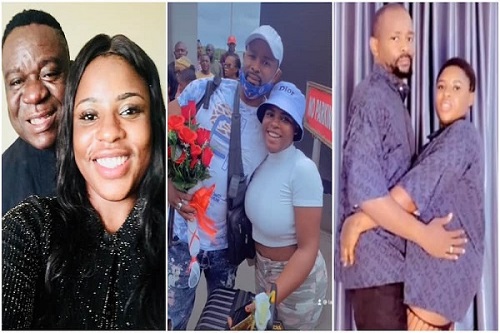 Jasmine, the daughter of popular actor Mr Ibu, has revealed she’s expecting twins with her hubby.

Jasmine, via a TikTok video, updated social media users about her marital journey so far.

According to her, her ‘best decision’ so far in life was getting married to her husband whom she met on the short-form video hosting service platform.

While celebrating 9 months of marital bliss, Jasmine revealed they are expecting twin girls.

With a TikTok video, Mr Ibu’s daughter narrated how she met her now hubby on the platform who decided to travel down to Gambia from the US to see her after they had communicated for two months.

He eventually ‘proposed to her four days after they met for the first time’.

Twenty-four days later, they got married in a private event.

She noted, nine months after, she’s ‘pregnant with twin girls’ and ‘they’ve been together till she’s ready to fly back with him’.

She ended the TikTok video with the caption: “My best decision.”