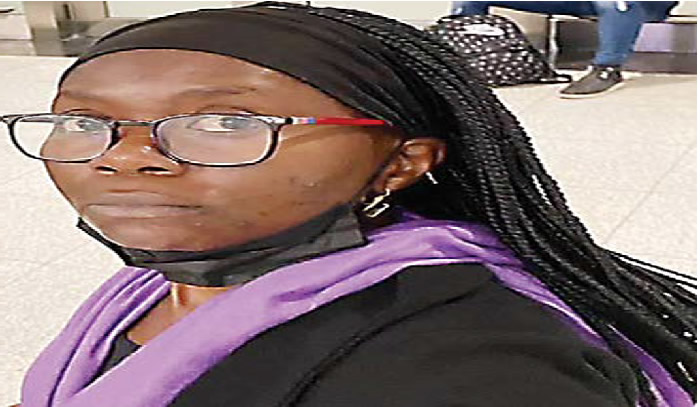 Thirty-eight-year-old Dinchi Lar, from Plateau State, is currently in jail in the United Arab Emirates for making a video of alleged ill-treatment of Nigerians by UAE immigration officers. The detainee’s brother, Benjamin, tells GODFREY GEORGE what the family is doing about the case

Tell us a bit about yourself.

My name is Benjamin Lar. I am from Plateau State. I work in Abuja.

What is your relationship with the Nigerian lady recently sent to one-year imprisonment in the United Arab Emirates for filming an episode with immigration officers in the country?

I am the younger brother to the lady. Her name is Dinchi Lar. She is 38 years old. It’s been over two months now since she was sent to prison in Dubai by the UAE government.She is still there as we speak today (Wednesday, November 9, 2022).The (Nigerian) government came in at some point and tried to get some attention for her as regards what happened but to date, it is like we have been left to handle things on our own.

What exactly transpired that led to your sister’s imprisonment?

It was not her first time in Dubai. She had been to Dubai before. This time would be the second time she was going to Dubai, which has now complicated her life. She travelled to Dubai on August 30, 2022. On the 31st, she was at the airport in Dubai. The immigration authorities of the UAE came in and detained a lot of Nigerians, claiming that they were on a family visa and could not be allowed into the country. They said she needed a family member or so for clearance. We have a sister, Nanfe Lar, who lives in Dubai and that was why Dinchi went on a family visa. She called Nanfe and she came to find out why she was being held hostage by the UAE immigration. That was after a lot of hours of no response from the government. Dinchi had been travelling the whole day and was now being made to spend about eight to nine hours at the airport with nobody telling her and other Nigerians why they were being held; it must have been a crazy day for Dinchi.

After a long wait, Nanfe came to the airport to meet her and they (UAE immigration officers) were able to clear her after about nine hours. It was in the course of all these things that I am sure Dinchi panicked and made a video, complaining about the ill-treatment meted out to her and other Nigerians by the UAE government. From the video she made, there were a whole lot of people arguing with the immigration officers about why they were being detained. Everyone was agitated, wanting to know why they couldn’t go into Dubai despite having valid visas. So, she made that video, which she posted on her Twitter handle, explaining to the public what was happening at the Dubai airport. This was after they had been kept for eight to nine hours.

You said the case was sorted out when Nanfe got there. Why was Dinchi then sent to prison?

The imprisonment happened six days later.  The post she made on Twitter had gone viral and people had started to complain about the ill-treatment of Nigerians by the UAE. The treatment was actually unfair. They should have told them why they were being kept in solitary confinement for hours rather than wait for nine hours before giving them the reason for not allowing them go. That was unfair.

I will be lying to say we know why she is being detained. The country said they have some social media law that forbids one from making posts with images of people without their consent. This is funny. The UAE government said it was wrong for her to make a video of herself being detained by immigration authorities of a foreign country. They said it was cybercrime to have shown the face of the immigration officer in the video. For me, this would not fly. It is normal everywhere in the world. In the United States of America, I see stuff like that. People say, “I am doing this for my own protection and safety.” Showing the face of the person who has detained you and given you no explanation  is a normal thing in any part of the world except the UAE, perhaps.

Being ignorant of that social media law, the authorities reached out to Dinchi on September 6, 2022, and told her that the police wanted to see her. My other sister, Nanfe, went with her to see the police. They directed her to the Criminal Investigation and Intelligence Department. She informed the Nigerian Consulate in Dubai. When she got there, the CIID detained her, claiming that they were investigating her social media account and stuff like that. She cooperated with them; she even gave them her phone. She then told them that she would take the video down and she did so. But they were not having it. When she was leaving Dubai the next day, they intercepted her and detained her.

Was there a court hearing?

Yes and Nanfe attended the court hearing, which was on September 28. That after keeping her (Dinchi) for some weeks without a lawyer or access to public life. No lawyer was given to her. She had no access to anybody. Nanfe called but her number was not connecting. On the day of the hearing, she was not given a lawyer, not even a public one. There was nobody. She was isolated from everything and everyone. Dinchi couldn’t make calls.

The hearing was more like a video call of some sort because they didn’t take her out of the detention centre of the airport. She was there all the while. They just called and asked her two questions: “Are you Dinchi Lar? Did you make a post on so and so day?” That was it. Even the statement the police wrote was in Arabic. She didn’t know what they were writing. It is possible they must have altered her statement and written something else without her knowing. So, they took her back to the detention centre. With the help of the consulate representative, they were able to see Dinchi through a glass shield that they put. That was how they were able to talk to her before they took her back to detention after some minutes.

Why didn’t the family make an arrangement to get a lawyer for her?

When the consulate couldn’t get a lawyer for her, we made provisions for our own lawyer. We had to speak to one as expensive as it was. We ended up contacting one for as expensive as 15,000 Dirham. When we wanted to pay, we learnt she would be released. So, we delayed the lawyer even while the arrangement had been made. So, they said at the hearing that they would deport her back to Nigeria since she was at the deportation centre. Later they said they were going to give judgment. I wonder how a court will give judgment without a lawyer. There was no fair hearing. This was not your citizen; she should have been given fair hearing and a lawyer. They just passed judgment on her, stating that she was sentenced to one year in prison for cybercrime. What is cybercrime? Was it the video post she made that she had taken down?

Was the judgment appealed?

They didn’t even let her file an appeal. They quarantined her, saying she had COVID-19, even after staying with a host of persons in the detention centre. They said they would detain her for 10 days. On the seventh day, they took her out, saying they wanted to use the facility. We don’t know what is going on. They had taken her to the jail section since they had passed judgment. It was when she came out of the quarantine centre that she had to send someone to go and check what her sentence was because there was no lawyer or legal representation. Eventually, the lawyer we hired filed an appeal and said they are working on the case.

When last did you hear from your sister?

What has she said about her time in jail?

The sad thing is that they are playing an emotional trick on Dinchi. They are frustrating her. She is not being physically tortured per se but quarantining her for COVID-19 when she doesn’t have it can be very traumatising. She has requested for the COVID test  to be done but up till now, it has not been done. She is just trying to be strong. She didn’t do anything to harm anyone. It was after that video that many Nigerians held at the UAE airport were released and sent back to Nigeria. So, her video helped people. There are a lot of questions the UAE government has to answer. Why sentence her to one-year imprisonment for a video she took down? What damage did that video do to anyone?

At some point, the Nigerian government, through the Nigerians in Diaspora Commission, intervened. How helpful has that been?

It was after the sentencing that the (Nigerian) government came in. This was after a lot of pressure from civil rights activists and organisations. Then, the House of Representatives member representing my constituency, Benni Lar – it is funny we have the same surname – came in to say she was not aware. All the attempts we made to meet her were futile but after much pressure, she came in. The Foreign Affairs Ministry is also aware. So, Mrs Lar has said the government is looking at making a diplomatic application towards  Dinchi’s release from detention.

How is your family taking all of this?

We are holding on fine. We are just trying to be strong. It has  really been difficult for the family. My dad is a retired military man. He served in the army meritoriously for more than 20 years. He is really broken. It is tough on him, my mother and the whole family. We wake up every day with the fear that something might happen to Dinchi. She is not safe; she is not free; she is in a strange land. She had just left her job hoping she would travel to Canada probably and now this is happening. It has been really tough. But we are hoping that as the government has come in, they would get Dinchi out.