The tribes, he said, are just the poor and rich.

He lamented the number of the poor is overwhelmingly higher than the rich.

He argued the rich were able to achieve that because the poor have bluntly resisted standing together to fight for their liberation.

Mr P in a tweet said: “We only have two Tribes in Nigeria, THE POOR and THE RICH. The poor are higher in number while the rich are fewer but the rich managed to keep the poor in perpetual slavery because the poor have refused to unite and fight for their freedom. 2023 election Vote Wisely #ObiDatti023.” 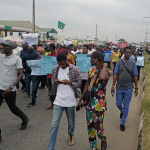