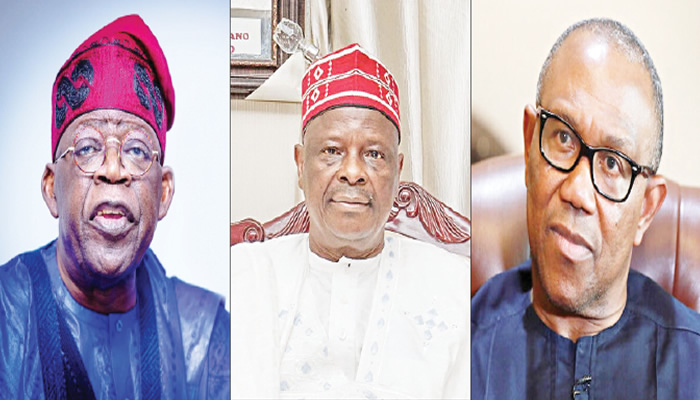 DEBORAH TOLU-KOLAWOLE writes on the struggle of Nigeria’s presidential candidates to visit the Chatham House, London, where they have been speaking about their missions and visions

In 2015, the President, Major General Muhammadu Buhari (retd), who was then the presidential candidate of the All Progressives Congress, went to sell his candidacy at the Royal Institute of International Affairs, Chatham House, London.

Buhari, who delivered an address titled, “Prospects for Democratic Consolidation in Africa-Nigeria’s transition,” intimated the audience of his plans for Nigeria if elected president, dishing out his plans for the various sectors in the country.

Though the former military head of state was accused by the opposition Peoples Democratic Party of bribing his way to speak at the UK think-tank centre, the APC noted that Chatham House would never compromise its prestige and integrity and allow itself to be induced financially by politicians.

In 2018, the then presidential candidate of the PDP, Atiku Abubakar also visited the London  centre to convince the international community on why he should succeed the incumbent president, Buhari, of the APC. Though Atiku lost the presidential elections, he made good use of the opportunity to sell his candidacy.

However, 2018 was not Atiku’s first time at the policy centre. The former Vice-president had during the height of the frosty relationship between the former president, Olusegun Obasanjo and himself in 2007, sought the platform of the Chatham House to advance his perspective of the adversarial relationship between his estranged principal and himself.

According to the information from its website, Chatham House describes itself as a “World leading policy institute with a mission to help governments and societies build a sustainably secure, prosperous and just world.”

According to former spokesperson to former president Goodluck Jonathan, Dr. Reuben Abati, Nigerian politicians have turned opportunities to speak in Chatham House into “badges of honour”.

Abati, in an article published in The Cable, stated, “Many Nigerians have for course appeared at Chatham House, but it is noteworthy that when Nigerian politicians do so, there is forever a tinge of self-advertisement and narcissism in their presentations, and this being the case, their opponents are quick to turn such forum into an occasion for combat and pugilism. We have seen this at play over the years but what is shocking now is how our politicians have turned an opportunity to speak at Chatham House into a badge of honour.”

On December 5, 2022, Asiwaju Bola Ahmed Tinubu, the Presidential Candidate of the APC, was at Chatham House, an outing that was attended by rather exciting drama as a result of his resort to what he called “team-ship” in responding to questions and comments raised by his audience. The drama overshadowed the subject of his presentation, titled: ‘Nigeria’s 2023 Elections: Security, Economic and Foreign Policy Imperatives’.

Tinubu was heavily criticised by commentators at home and abroad. On January 16, 2022, it was the turn of Mr Peter Obi, the Presidential candidate of the Labour Party to address the subject: ‘Nigeria’s 2023 Election: A Vision for Policy Change and Institutional Reforms’.

On January 18, it was the turn of Dr Rabiu Kwankwaso, presidential candidate of the New Nigeria People’s Party, with particular focus on his policy ideas for Nigeria.

The candidate of the People’s Democratic Party, Atiku Abubakar has yet to show up at Chatham House this time, although he had been there on two occasions – 2007 and 2018.

“Alex Vines, director of Africa Programme at the Institute has however confirmed that Atiku has been invited, but he is yet to respond to the invitation. He probably would honour the invitation before the elections proper, so he and his aides are not left out of the Chatham House jamboree,” Abati noted in the article titled, “The Chatham house effect.”

Prior to this, the former governor of Lagos State had shunned several engagements with the media and other civic organisations back home.

Defending his decision, the APC candidate told the global audience that he refused local engagements and opportunities to sell his candidacy back home because some media houses wanted to “make money off him.”

Though Tinubu did not mention the names of the individuals trying to make money “off him”, he later granted a mini-interview to the British Broadcasting Corporation.

At the institute, Tinubu who delivered a speech titled, “Nigeria’s 2023 elections: Security and economic development and its foreign policy imperatives identified power supply as a major challenge in Nigeria.

He pledged to address it and other issues if elected president. Another intriguing aspect of his Chatham House engagement was his decision to delegate questions thrown to him by the audience to members of his team.

Despite what the oppositions tagged as a ‘show of shame,’ supporters of the former Lagos state governor hailed his appearance at the policy center.

The candidate of the Labour Party was the second presidential candidate in the 2023 general elections to visit the ‘sacred’ Chatham House in a bid to sell his candidacy to the global audience.

Though, widely regarded as a “social media” candidate by the opposition, the former governor of Anambra State never turned away any opportunity to sell his candidacy to Nigerians.

From new media engagements to townhall meetings, the businessman-turn-politician has always talked about his desire to commit to a “new brand” of politics.

At Chatham House, Obi pointed out the rising insecurity and decline in economic output.

Kwankwaso has not been left out of the varied campaign strategies devised by the big four candidates to boost their chances at clinching the nation’s mosr prized seat.

Though his candidacy seems not to be gaining momentum like that of the APC and LP candidates, Kwankwaso was also not left behind as regards the overly hyped “Chatham House” effect.

His supporters popularly known as ‘Kwankwasiya movement’ also hyped their principal’s outing, while adding that his’ was the best appearance so far.

Speaking at the Centre, the former governor of Kano state and a former minister of Defence, blamed Nigeria’s woes on the wrong choices made by those ruling the country from 1999 to date, observing that the country was beset by numerous challenges that included, high rate of unemployment, insecurity and growing poverty.

Kwankwaso also used the opportunity to dispel rumors of the probability of him stepping down for another presidential candidate.

A former Assistant Inspector General of Police, Ambrose Aisabor (Rtd), and a Human Rights Activist, Barrister Osagie Obayuwana,  described the invitation of presidential candidates  to speak about their policy thrusts at the Chatham House in the United Kingdom as a form of neocolonialism.

Aisabor said, “Chatham House address is a distraction. The issues the candidates are going to tackle are Nigerian problems. So, on what basis are they going to Chatham House ?”

On his part, Obayuwana, described the development as being subservient to colonial mentality.He said, “The British are not voters in Nigeria, and those who go on pilgrimage to Chatham House are not going there to see Nigerians, but to beg for approval and kind consideration of the British government.”

When contacted, the Special Assistant on Public Communications to the PDP candidate, Phrank Shuaibu noted that his candidate would not be visiting the think-tank centre.

He said, “He was there before the 2019 elections. There is nothing new to say in the Chatham House. He won’t be going”.

Speaking in defence of his candidate, the director of publicity, APC, Bala Ibrahim, said, “Some media houses are partisan but masquerading as journalists and that is why Asiwaju refused to honour their invitation. However Chatham has always been known to be neutral and that is why our candidate went there”.

Efforts to get the spokesperson of the NNPP, Major Agbor proved abortive as calls and messages sent to his line remained unanswered.

Similarly, the spokesperson for the LP-PCC, Tanko Yunusa failed to respond to inquiries by The PUNCH.