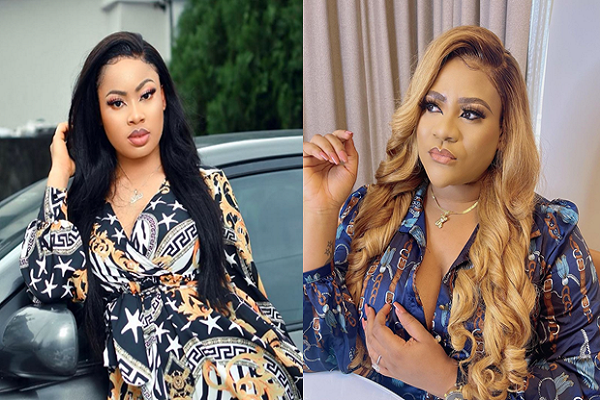 The US-based reality TV was reported to have recently remarried an Africa-American businessman, Chris Miller.

They met sometime in 2021 and dated for seven months before finally tying the knot privately in a court in the United States of America.

It was gathered that the marriage was consummated in April 2022 and Nina has since changed her name on all social media platforms to the husband’s name, Nina Ivy Miller.

Prior to that time, Nina was reportedly married traditionally to one Anthony who did not show up at the wedding in 2020.

The traditional marriage ceremony stirred reactions on social media since it was done in proxy.

As such, many said it was a camouflage marriage in a bid to escape the ‘baby mama’ title seeing Nina was pregnant at the time.

During those times, Nina never shared the image of her ‘hubby’ online as she kept the marriage’ strictly off social media.

Following the news of Nina’s ‘second’ marriage Nkechi who has always bared her life and business for all online said Nina’s marriage crashed even though she kept it off social media.

Advising individual to live life in their own terms, NBS argued keeping one’s marriage offline isn’t a guarantee that it will not eventually crash.

She wrote: “She kept her marriage off social media oo, e still no work. My darlings do you, the world will adjust”.

Reacting, though Nina’s name wasn’t specifically mentioned, she however, hushed Nkechi informing her that she doesn’t have to chase clout with ‘everything’.

The mother of one wrote: “@nkechi_blessing_Sunday not everything is for your clout, plus you know absolutely nothing about me. You can only feed off social media news. So please shush.”