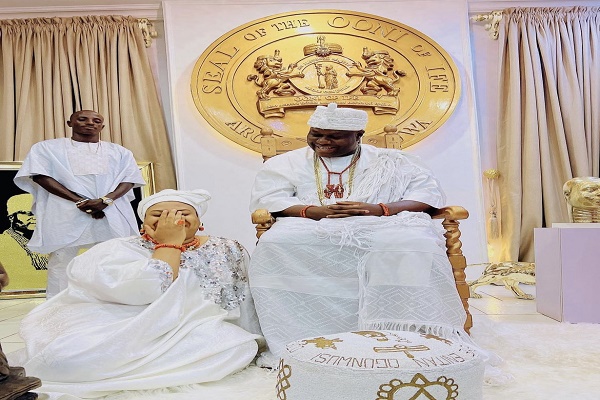 Actress Nkechi Blessing Sunday has been received by Ooni of Ife, Oba Adeyeye Enitan Ogunwunsi in his palace at Ile-Ife, Osun State.

Her visit to the palace on Monday is coming after a few weeks of ‘shooting her shot’ at the monarch to be his next wife.

She recently expressed her desire to be the seventh wife of the revered Ife monarch.

She also thanked the monarch for calling on her IG story.

In a recent development, the movie star shared a photo with the monarch at his palace describing him as jovial.

The 33-year-old also confessed that she’s never had to laugh as much as she did while with his Imperial Majesty.

She captioned the photo: “Ever met a jovial king? Well this picture says it all. I have never laughed this hard in a long time. Thank you so much for the warm reception his Imperial Majesty Ooni of Ife, Oba Enitan Adeyeye Ogunwusi Ojaja II. God bless your existence.”