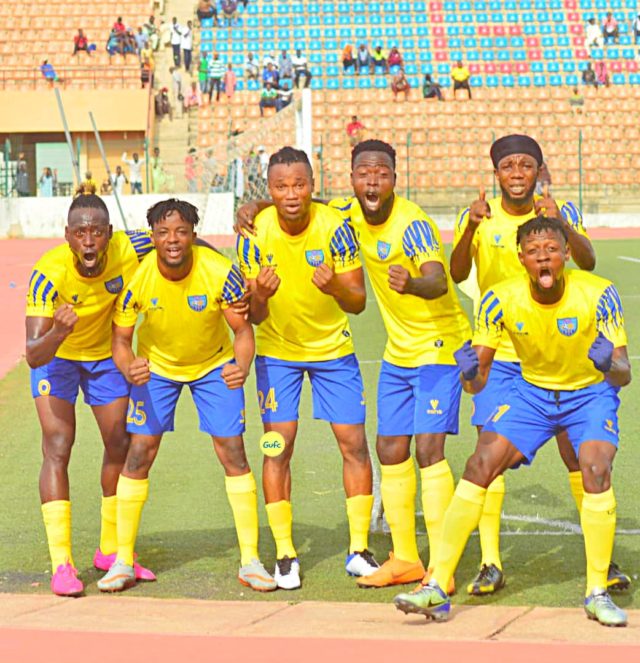 Newly-promoted Doma United Football Club of Gombe on Sunday secured their first victory in the Nigeria Professional Football League (NPFL) with a hard-fought win over Dakkada FC of Uyo.

Sporting Tribune reports that they however missed a lot of goalscoring chances in the Match Day 3 fixture of the abridged 2022/2023 NPFL season.

In the match played at the Pantami Township Stadium in Gombe, Ogwuche Emmanuel scored for the home team to secure their first maximum points in the 59th minute.

Speaking at the post-match conference, Akinade Onigbinde, the Technical Adviser of Doma United FC, said the match’s outcome had boosted the team’s confidence going into subsequent matches in the league.

Onigbinde, while describing the result as well-deserved, said his team would not relent but work harder to sustain the tempo “so that we can keep moving up.”

He said his team’s target in the competition now was to secure the maximum points from all home matches, so as to “work towards finishing in the top-three position.”

Onigbinde however commended his team and coaching crew for working hard to secure their victory from the match.

Speaking also, Danlami Umar, the Head Coach of Dakkada FC, said the outcome of the match was a reflection of what football offered.

Umar said he was however not disappointed with his team.”The players did well. The result just didn’t go our way.”

He said his team was good irrespective of the outcome of the match and pledged to work on their lapses towards ensuring better results in subsequent matches.

Umar however described the attitude of the home fans as “very hostile.”