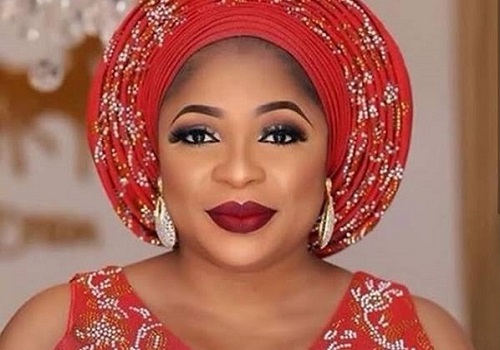 Actress Kemi Afolabi has spoken of how sad she is to return from her medical trip to the United States of America.

In March, Afolabi said she was suffering from an ailment that had drained her physically, financially and emotionally.

She said in an interview with Chude Jideonwo that she was suffering from lupus, an incurable condition for which a doctor said she had just five more years to live.

According to her, she has already lived one of the five years, leaving her with four more.

Following the news of her ailment, her colleagues in the movie industry rallied to seek funds for her urgent medical attention.

She was granted an emergency health visa in the US to begin a lifesaving treatment for her terminal illness.

But on her return, the 43-year-old film star lamented the state of the country, the bad roads and insecurity.

She claimed things were still the same way they were before she left.

Afolabi wrote: “Back to my biggest fear…my country NIGERIA. Nothing has changed! Same Nonni

“Our Airpot arrival is damn too hot. The way quickly removed my Top and tied it on my waist to rock my camisole with pride ehn! Them no they tell person, body go tell you.

“From the Lagos Murtala Mohammed International Airport through Oshodi to Mowe via the Lagos/ Ibadan Express way na traffic full everywhere! In the end no clue for the cause

“Wait, what are these politician using to campaign in the forthcoming elections naa because me I am not understanding o.

“It must be extremely hard a task for the right authorities to track down kidnappers! This is no longer funny at the rate kidnapping is on the rise on a daily in Nigeria.

“What will it cost the government to start ransacking day and night with the use of helicopters, ground troops and all?”

Afolabi further called out the Ogun State governor, Dapo Abiodun over the bad roads in the state while also appealing to him to facilitate its repairs.
Wrapping up her lengthy post, she wondered why she felt sad when she ought to be excited following her return to the country after a while.

“Bia Ogun state government when are you guys fixing the roads edakun this one concern una o.

“Your excellency sir @dapoabiodunmfr we need your help urgently, the ofada, obafemi – owode, in mowe -ofada in Ogun state amongst others has gotten really worse. HELP US SIR, May God strengthen you to do it.

“Why am I feeling this way though, I am supposed to be happy to be back home after a long time but am just so sad mahnnnn”, she added.

I didn’t attend any church for healing- Kemi Afolabi

What to know about Kemi Afolabi’s ‘incurable’ ailment lupus