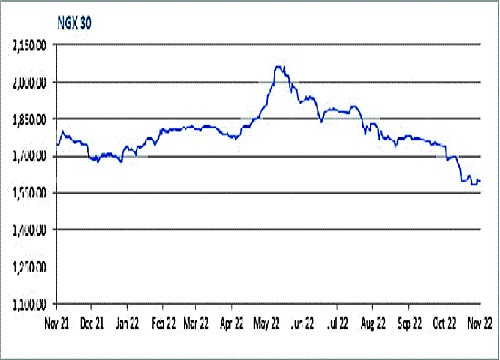 Beyond the general market outlook, there is a different market for every investor, reports Deputy Group Business Editor Taofik Salako

The overall market position usually plays a trick on many investors. A blend of several movements and dynamics, when the overall market position is up, there is the euphoria of a generally rising market and when it is down, there is a discouraging feeling of decline. This is illustrative of the general sense of the benchmark indices. But there are always differing returns based on several segmentations and portfolio composition.

Benchmark indices at the Nigerian equities market indicated net loss of about N2.8 trillion in October 2022. This implied average loss of 10.58 per cent during the month. The decline in October shaved the average year-to-date return from 14.77 per cent by September 2022 to 2.6 per cent in October 2022. Nigerian equities, which had closed the third quarter ended September 2022 with net capital gain of about N3.3 trillion for the nine-month period, was left with net gain of about N580 billion by the end of the 10th month.

The All Share Index (ASI)- the common value-based index that tracks all share prices at the Nigerian Exchange (NGX)  declined by 10.58 per cent to close October at 43,839.08 points as against 49,024.16 points recorded at the beginning of the month. Also, aggregate market capitalisation of all quoted equities dropped from its month’s opening value of N26.451 trillion to close October 2022 at N23.878 trillion, a face value loss of N2.57 trillion but a real adjusted loss of N2.797 trillion. The difference between the ASI and aggregate market value was due mainly to the listing by introduction of Geregu Power Plc, which led to primary increase in number and value of outstanding shares at the Exchange.

Pricing trend analysis shows that investors’ returns differ and the extent of gains or losses depends on the stocks that make up an investor’s portfolio. Despite the negative pricing trend in recent months, which had significantly eroded year-to-date investors, several investors have huge positive returns that still make them comfortable even after adjusting for inflation and cost of capital. Although the rate of decline was slower, several investors, on the other hand, have also lost more than the average market return and must be ruing 2022 as the worst year so far.

Out of the 155 quoted companies tracked at the NGX, there were 46 stocks on the upside, more than 39 unchanged stocks but lower than 70 stocks on the losers’ list. As against the average 10-month return of 2.6 per cent, top 10 gainers made returns of between 64.7 per cent and 2,210 per cent. With even inflation rate at 21.09 per cent and the Monetary Policy Rate at 15.50 per cent, investors with the least return within this group still had more than 28 per cent fully adjusted real return, a mouthwatering return not realisable in any other class of regulated assets.

Conversely, the top 10 losers for the period lost between 31.5 per cent and 54.9 per cent. This implied that the real negative return at the top bracket might be as high as 90 per cent, such dismal situation that makes people to gloat over zero or low-yielding savings account.

Companies with the highest returns included Multiverse, 2,210 per cent; Meyer Paints, 393.48 per cent; Academy Press, 170 per cent; Guinness Nigeria, 112.56 per cent; Seplat Energy, 84.62 per cent; Jaiz Bank, 69.64 per cent; E-Tranzact International, 69.31 per cent; SCOA Nigeria, 68.27 per cent; RT Briscoe Nigeria, 65 per cent and Fidelity Bank Plc, which recorded net return of 64.71 per cent for the 10-month period.  It should be noted that Multiverse’s return was partly due to its massive share reconstruction and not entirely due to ordinary pricing trend like other stocks.

The secret to success in stock investing, most analysts will say, lies in diversification. Diversification simply means investing in stocks across any sectors and growth cycles such that losses in some stocks or sector are counterbalanced by gains in other stocks and sector. Beyond sectoral categorisation which is based on the business operation, shares are also categorised by the intrinsic fundamentals and technical values. So, there are value stocks- mature stocks with steady pattern; growth stocks-relatively volatile but with potential; blue chips- well-established market leaders and least volatile and penny stocks- low-priced stocks susceptible to high volatility but less liquidity among others. The composition of the gainers and losers also lent credence to this, from natural resources to financial services, banking, industrial goods, oil and gas, agriculture, financial services, consumer goods to real estate as well as diversity in growth cycles, from penny stocks to blue chips.

She explained that investors could optimise the tough operating environment by investing in assets that hedge against inflation.

According to her, there are resilient sectors that outperform inflation and generate alpha returns.

“There are resilient stocks that thrive during inflation because of their underlying assets. Investors should build their portfolios with stocks of companies in the healthcare, energy, commodities, consumer staples, financials and real estate among others as a risk and reward trade off. We should not lose sight of mutual funds which is a collection of investment in different asset classes,” Nnodi said.

According  to her, it is settled in portfolio management that during high inflation rate, mutual funds provide an opportunity for diversification and better returns with advantages suh as sharing of investment expenses, economies of scale and operational efficiencies, ease of investing  in specialised market sectors and investment tracking, simple portfolio management, access to professional money managers and  low trading costs.

Mutual funds, otherwise known as collective investment schemes (CIS), are joint investment vehicles through which investors can pool funds and invest in chosen basket of securities with a view to optimising returns and reduce risks. A mutual fund is usually categorised by the class of assets that forms the primary focus of its investments. Thus, there are equity funds, money market funds, bond funds, real estate funds, ethical funds and balanced funds among others.

Frontline businessman and former president of Nigerian Stock Exchange (NSE), Dr Goodie Ibru, said despite the volatility, investment in the equities market remains the most profitable of investment options.

He urged Nigerians to embrace the stock market, noting that average return on equities portfolio in Nigeria and Africa is 30 per cent and 35 per cent respectively per annum.

“In today’s realities, the best investment is in equity. The average return in Nigeria and Africa is 30 per cent and 35 per cent per annum which is very attractive. A good equity market will encourage government to partner with the private sector to undertake infrastructure projects under a public private policy programme,” Ibru said.

Analysts meanwhile agreed that investors must keep unflinching eyes on the fundamental performance of the companies.

Analysts at Arthur Stevens Asset Management advised investors to “go for stocks with good fundamentals” in the midst of uncertainties.

“We expect bearish sentiments to remain predominant next week in the absence of any positive triggers to turn the tide for Nigerian equities. Nonetheless, we reiterate the need for positioning in only fundamentally sound stocks as the weak macro environment remains a significant headwind for corporate earnings,” analysts at Cordros Securities stated in a recent advisory.

The balance sheet of the non-interest bank also emerged stronger with appreciable growths in customers’ deposits. Total assets rose by 16.4 per cent to N325.06 billion by September 2022 as against N279.28 billion recorded at the end of the year ended December 31, 2021. Customers’ deposits rose from N111.56 billion in December 2021 to N118.11 billion in September 2022.

So, for investors, the market is a big tree with different degrees of shades for all under it.