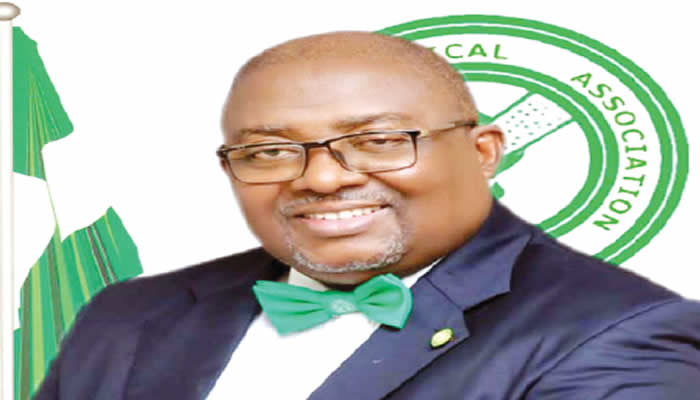 The Nigerian Medical Association has called for psychiatric evaluation  of governorship and presidential candidates ahead of the 2023 elections.

The professional body also said medical tests of the candidates would provide a comprehensive view of the state of the body system of those aspiring to hold political offices in the country.

There had been calls for medical screening of candidates to determine their state of health with many Nigerians arguing over the constitutionality or otherwise of such a move.

The Chairman of the National Drug Law Enforcement Agency, Brig. Gen. Buba Marwa (retd.), stoked the controversy in April when he asked political parties to include drug integrity tests as part of the screening processes for  candidates.

Speaking to The PUNCH in Abuja on Tuesday, the NMA  President, Dr Uche Ojinmah listed the battery of tests that candidates should undergo to ascertain their state of health and fitness for office.

He said, “Simple medical check-ups such as chest X-ray, cardiac echocardiography, abdominal ultrasound scan, urinalysis, kidney function test, liver function test, blood pressure and blood glucose assessment will give one a comprehensive view of the state of the body system.

“Sadly, people applying for top level jobs like Chief Medical Director or Medical Director in our public service are made to undergo these tests while those contesting for executive and legislative posts don’t.’’

“We also want them to undergo psychiatric evaluation. These shall exhaustively evaluate the people vying for the ultimate job in Nigeria,” the NMA president added.

On how the tests should be done, Ojinmah said a professional body like the NMA could be charged with setting up an independent panel to carry out the medical and psychiatrist tests.

He said, “The NMA could be given the responsibility of choosing an independent panel of people who are well known in those different fields to carry out the tests because the problem is that if you allow a government agency like the Medical and Dental Council of Nigeria or others, the government in power can influence it.

“So, we will prefer a professional body to be given the responsibility of setting up a panel of renowned specialists in the necessary areas to carry out a clear survey and present the report to the Independent National Electoral Commission.”

The NMA President noted that the medical and psychiatrist tests should be made public.

“If a mad man is about to be president, we should be told, that is just the truth. We see a lot of things going on with those in power, you will realise that there is imbalance. So, I think the results should be made public, we have a right to know.

“When they are going to vie for a Medical Director or Chief Medical Director of hospitals, they do most of these tests and those who will take the decision of choosing will see the results. So, people are going to be President and they don’t think that we should see their results? We are the ones to make that decision, we should see their results.”

Asked if any candidate who is not medically or mentally fit should be stopped from vying for any position, he said, “It is our position that if you have a mental problem or a neurological problem or you have any organ damaged that may not be treatable, or you are psychiatrically imbalanced, you should not be allowed to lead, you should be stopped. Will you make a mad man your traditional rulers? You will not.”

Other national offices including the NMA secretary and publicity secretary aligned themselves with Ojinmah’s position, saying once their president had spoken, they can’t speak on the issue again.

Earlier, the Director- General of the Nigerian institute of International Affairs, Prof. Eghosa Osaghae called for enforced medical check-up for would-be Nigerian leaders, saying many of them were suffering from chronic diseases.

Speaking during the 2022 Citizens’ Get Together, a shareholders’ gathering convened by the Unity House Foundation, to examine and proffer solutions for free, fair, and peaceful 2023 elections in Port Harcourt, Rivers State, Osaghae insisted that the 2023 election candidates must be subjected to medical tests.

Findings by The PUNCH indicate that medical evaluation of political candidates is not mandatory in many countries.

For instance, presidential candidates and others seeking election in the United States were not required to pass mental health examinations or psychiatric evaluations.

But the 25th Amendment to the US Constitution allows members of a president’s cabinet or Congress to remove a president from office if he is mentally or physically unable to serve.

Speaking with one of our correspondents, Emeritus Professor of Political Science, University of Nigeria, Nsukka, Obasi Igwe, said “To take up appointment in the university, army, companies, etc, you need a medical certificate of fitness, and these are essentially policy implementation appointments.

“If those implementing policy from below are expected to be medically fit, why should those making the policy be exempted from health fitness in Nigeria when in all other serious democracies medical certifications are constitutionally mandatory?’’

Canvassing the benefits of the proposal, he said, “Far from harming the legitimate interests of political officials, health certification actually protects them. For the people would now know that whatever health challenges befall the official is as a consequence of his service to the nation and not a pre-existing condition and as such becomes obligatory on the populace to offer care.”

A lawyer, Kunle Adegoke said it was a desirable thing to insist on medical examinations for the aspirants, noting, however, that the legality of the proposal had to be considered.

According to him, such a proposal must be backed by the law before it can be enforced.

“The legality of that proposal is another consideration altogether. If it is not backed up by law, there will be no basis for it. There is no provision in the constitution today or in any part of the national assembly, making it possible for political aspirants to be medically examined.

“And if that is going to be, then there must be an amendment to the constitution. Currently what we have is that you must not have been adjudged to be a lunatic. So, it’s an integral part of the judicial structure of determining if the person is sane or otherwise,’’ he submitted.

On his part, Mazi Afam Osigwe, SAN, dismissed the proposal as irrelevant, adding that corrupt leadership was a far greater issue than whether or not a person was fit medically or mentally.

Waiving off the idea, the senior lawyer said, “How are we not certain that most of the people who have misgoverned Nigeria, states, and local governments, are not people who are mentally fit, but just corrupt and incompetent, and who will rather do the wrong things?

“We pay attention to useless things. It will achieve what to have these evaluations? What proof do we have that we have been ruled by people who have mental illness?’’

A human rights activist, Inibehe Effiong argued that medical checks was not a constitutional requirement neither is it a part of the requirements for seeking public office.

What the NMA suggested, he noted, was advisory, stressing that no one could compel a candidate to subject himself to medical evaluation.

“It does not appear that most of our leaders are of sound mind so I would personally favour any conditional amendment that would make that would provide for a process where those seeking public offices can be mandatorily subjected to mental evaluation,’’ Effiong said.

Speaking on the NDLEA proposal, the agency’s spokesman, Femi Babafemi said beyond political parties, many tertiary institutions, traditional and religious institutions have accepted the initiative.

“Some political parties have also accepted the idea and expressed their preparedness to work with the agency on this. It must, however, be noted that it’s not a legal requirement at the moment but an advocacy move and we’re glad some progress is being made,” he said.

The spokesman, however, declined to name the political parties and aspirants who have undergone the test.

He said, “Because it is an advocacy initiative, so we have to be careful about who we name to avoid the fear of stigmatisation that a lot of drug users are worried about. So, it’s like your medical record with a hospital; you know no doctor will disclose publicly but a number of political parties have responded positively.’’

Interestingly, the APC, the African Action Congress and the Labour Party said their candidates are willing and ready to submit themselves to the drug integrity test proposed by the NDLEA.

The Director of Publicity, APC, Bala Ibrahim said the party would not object to the test if other parties will participate.

“If the NDLEA has reasons to suggest that; their reasons may be germane and I don’t think the APC will object. After all, the APC is for progress, it’s so confident that its members are sane and its members are people that will not engage in any unlawful act.

“We welcome the process, and our candidate is ready whenever they are. However, we’ll insist on modalities to improve the integrity of the process, and create a level playing field,” he said.

The Labour Party also welcomed the drug integrity test for politicians, noting that those in position of authority must always be above board and be exemplary in all facets of life.

The party’s Publicity Secretary, Arabambi Abayomi said, “It is not in doubt that, some in leadership positions, especially under the current administration need to surrender themselves for drug test.

“How else can one explain the stealing under the watch of this APC-led government, especially when the Auditor-General of the Federation is found in possession of stolen N109bn. This bring us to the conclusion that such a person must be subjected to psychiatric evaluation, which of course can be traceable to the influence of drugs”

When contacted, the National Publicity Secretary of the Peoples Democratic Party, Debo Ologunagba, claimed he had addressed the issue and would not want to comment again.