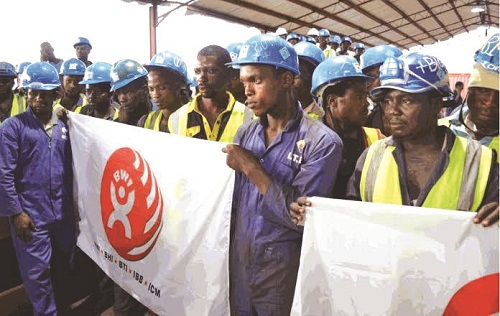 Unemployment and underemployment are major factors that drive poverty. Most employers are capitalising on the high rate of unemployment in the country to maltreat their workers. Many foreign firms are exhibiting tyrannical characteristics. TOBA AGBOOLA writes.

Expand Grand Limited (E&G) took everything from me—my sense of humanity, sanity, confidence, and trust,” Felix, an ex-sales executive at the company said of his time working there.

Speaking further, Felix said: “We worked around the clock. The company’s CEO would send you messages by 2am and expect a response asap. No rest. We went to bed every night praying our jobs would still be there when we woke up the next morning.”

On November 22, 2021, Felix’s prayer, which seemed to work for over three years, didn’t work. He was abruptly fired from his job. He fell into depression, and everything stopped making sense. He stopped going out, and his relationship with friends and family suffered. Even though he said working at E&G for over three years was torture; it was all he had at the time.

In the HR’s termination email to Felix, he was fired because of a “lack of cultural fit and poor performance”.

But Felix wondered: “How could I have been culturally unfit and incompetent after working for you for over three years? Why did it take you that long to clock my incompetence?”

According to Felix, despite the daily verbal assaults he endured in the hands of his boss, all he wanted to do was to be the best salesperson in the company and make his employer proud. He hadn’t done much work in sales prior to E&G, so he put in more work. Within five months, according to him, he had the second-highest number of clients on their sheets at the time. He closed some of the biggest clients. Some of them with over N15 or N20 million.

Despite his achievements, however, Felix did not succeed in making his boss proud.

“There was no free day from boss’ verbal abuse. If he wasn’t calling me a useless person, he was threatening to fire me,” Felix said.

Felix described his time there as the darkest period of his life.

The rate at which some foreign entrepreneurs and investors, especially in the manufacturing subsector, violate the rights of their workers and the Nigerian labour laws, is alarming.

It is fast-becoming a common occurrence to see labourers/workers deformed by industrial machines; getting the stipulated entitlements that could cushion the adverse effects of the accidents on victims is difficult and frustrating.

Most of the firms found culpable, it was gathered, include Chinese and Lebanese companies, as well as some Nigerian firms in acts of unhealthy work practices.

Many foreign companies in Nigeria have been accused of going against labour laws and treating their Nigerian workers with disdain.

Labour experts described as alarming, the way foreign firms violate the rights of their workers and labour laws.

They said it was fast becoming a common occurrence to see labourers/workers deformed by industrial machines, while getting the stipulated entitlements that could cushion the adverse effects of the accidents on victims was also difficult and frustrating.

General Secretary, the Federation of Informal Workers’ Organisation of Nigeria (FIWON), Gbenga Komolafe, who said the issue had been a recurring one, linked it to labour abuse, degradation and labour relations.

He gave instances of workers losing their limbs and lives due to non-provision of personal equipment by these firms; and also cases where the workers, who are mostly casuals, are being overworked, exceeding 14 hours.

He traced it to the ‘over-flex-civilisation’ of labour relations that had been taunted in the last two decades, stating that it makes it possible for companies to have perpetual casuals.

According to him, as casuals, they cannot be unionised. “Unions cannot provide basic protection, cannot play oversight roles on whether they are working on the right kind of decisions. This is labour degradation, which manifests overtime, using complex cases to take up on all of them,” he said.

He said the union had taken up countless cases of issues at the National Industrial Court (NIC) on domestic workers over bad abuse and arbitrary dismissals. He said the union had continued to campaign against casualisation, which he said has taken a huge chunk of workers.

“We ask that the laxity in labour law that legitimises them should be amended. We will continue to fight for union rights should be for all workers.

“It is part of the agenda of political reforms that workers get better representation in governance. All workers should have basic protection, secured work environment and basic protection of the union while at work,” he said.

On the kind of punishment or sanctions that should be meted on them, he gave an instance of an expatriate, who referred to one of his employees as a slave, he said the union took it up and justice was served and the expatriate was sent out of the country.

For some of the informal sector workers that are not unionised and have been maltreated by these foreigners, he urged them to report at the office of the public defender, Federal Ministry of Labour and other intervention centres on human rights abuse.

Komolafe urged that Nigeria should create a standard on domestic employment so that whenever an employer deviates, there would be punishment for the person.

He said: “You cannot recruit someone and mortgage the person’s salary. They should make it public so that the employee will know his right. Mortgaging someone’s salary is illegal. Domestic workers should know that the employer cannot pay them anything less than N30,000 monthly.”

To tame foreigners’ abuse in Nigeria, he said there should be a regulation, “make it punishable either for an expatriate or Nigerian. It should be sponsored as an administration and as an Executive Bill to protect the weakest people in the country.”

On employers capitalising on the country’s underemployment rate to maltreat workers, the Director-General of the Nigeria Employers’ Consultative Association (NECA), Adewale Oyerinde, said when an employer decides to play otherwise, there are provisions in the labour laws that address such through the Ministry of Labour and factory inspectors.

According to him, it is the responsibility of the employees to speak up about employers not meeting their obligations, adding that labour should not be treated as an entity.

“For us, we advise that the employees become more vocal, don’t sit down and die in silence or go through work conditions that are detrimental to health or terms and condition of employment. He should seek guidance from relevant authorities,” he added.

The Deputy President of the Nigeria Labour Congress (NLC), Joe Ajaero, who noted that businesses were not working due to economic policies and failure of governance, said: “If companies can’t make a profit, it will be difficult to pay salaries. Government that is the highest employer of labour cannot employ and can’t get the enabling environment for people to set up their businesses to make money. The workers you are sacking are the victims even when they are making profits, they still want to maximise the profit and that makes it difficult.

“While they are sacking, they are putting pressure on the few they are retaining. If one person has to do the job of three people, it will affect his health. That is why there is the issue of sudden death on daily basis.”

A Public Affairs Analyst, Jide Ojo, said because of a growing glut in the unemployment market, it was very easy for multinationals and foreign firms to maltreat workers.

Stating that the Federal Government is compromising Labour laws, he revealed that many of the Chinese firms operating in Nigeria overshoot their expatriate quota, through the Federal Ministry of Interior. He accused labour leaders of compromising the unions, adding that they sell out after being bribed out by these companies.

“Reliable source quoted that people accused of jail terms in China are being brought to Nigeria to serve their prison term as field workers and labourers. They are serving a jail term. Instead of keeping them inside the jail, they will bring them to Africa as a means of serving their jail term and make them work on the field under the disguise that they are technical staff.   “The expatriate quota is controlled by the Ministry of Interior, through the Nigeria Immigration Service, after they grease palms of some of their seniors, they look the other way. Those who are supposed to be occupying the space of senior management positions are not there. We are losers.

“We have not been able to broaden our productivity base. If there were more jobs created and strict enforcement of the labour laws, many of the multinationals operating in Nigeria will not be able to toil with the terms and conditions as enshrined in the nation’s labour laws. But there are compromises along the value chain at the level of ministry and agencies that are supposed to enforce the laws,” he said.