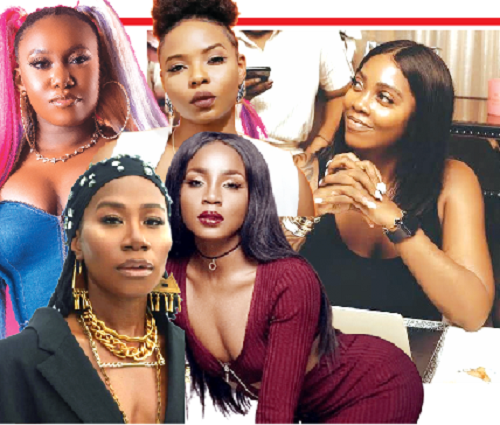 Collaboration in music is one of the most important aspects that many Afrobeat musicians should always consider, as it can help them expand their fanbase, open doors, and advance their careers. While male entertainers are tapping into the power of teamwork to create hit songs, their female counterparts are failing to duet on major projects together. OLAITAN GANIU profiles some brilliant Nigerian female artistes who have refused to work together.

THIS is a case of two Nigerian pop stars vying for the same coveted spotlight. Tiwa Savage and Seyi Shay’s feud has been one of the most talked about on the Nigerian entertainment scene. They both have proven to be successful singers, but ego seems to be the genesis of their feud. Their dispute reached new heights in 2021 when the two artists confronted themselves at a salon in Lagos. In a viral video, the two mothers were seen exchanging words, cursing each other, and almost going physical before the salon workers intervened. Despite their clash, fans are anticipating their collaboration.

It’s no surprise that Tiwa Savage appears twice on this list. This time around, it is the story of two queens battling for the royal crown. Since the beginning of their careers, Yemi Alade and Tiwa Savage have been exhibiting ‘cat and dog’ behaviour in the industry with each other as they subtly battle for supremacy. There are various stories about how their perceived rivalry began, but the two have formed a parallel line for as long as fans can remember. Industry watchers believe a collaboration between singers Yemi Alade and Tiwa Savage could unite their followers and set a new path for budding female music artistes. When asked if Yemi would like to work with Tiwa, she said fans’ pressure might never allow them to collaborate because she is not sure if the outcome would be positive or be overrun by negative things and all the fights.

This is not about rivalry or grumbling. In fact, comparing these two virtuosos would be unfair.

Simi has shown that she has high regard for the Nigerian-French singer when it comes to music.

The ‘Duduke’ singer once cautioned a fan who tried to compare with Asa. “Nobody displaces a queen like Asa. Yo! Stop playing. “We just get another throne and queen together,” she said.

In an interview, Simi picked Asa as her role model, saying: “Asa opened the door to be able to do things that are outside the box. There was a mainstream sound, which is changing. So listening to her made me feel like I could do anything.” No doubt, the two songstresses are well-known for their sonorous voices and supreme lyrical dexterities, but fans have been longing for their music collaboration.

No doubt, Tems and Ayra Starr are the hottest female artists on the Nigerian music scene at the moment. The two have strikingly similar vocals that resonate with music lovers. Oftentimes, critics compare these two young acts together. Speaking on her comparisons with Tems, Ayra said she feels honoured to be compared to such an amazing artist. “I don’t know, it’s a compliment to me though, because I’m a young artiste and Tems is an amazing musician. I just released music weeks ago, and for people to even compare me to such an amazing musician is such a compliment, and I’m so grateful and honoured,” Ayra said. On a possible collaboration, she responded: “Of course! Why not?” As their reign continues as the new school of Afrobeats queens, fans are expecting their joint track.

It’s unbelievable that these two blood sisters have never recorded a song together.

Teni is the younger sister of Afro-fusion singer Niniola. Though they are family, there’s a sharp contrast between Niniola and Teni Makanaki’s artistry that fans can’t wait to feel. Yet both sisters have yet to collaborate on a song together.