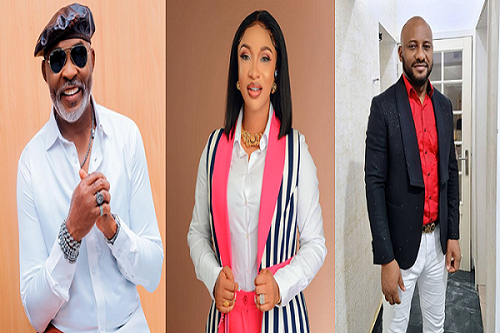 Some Nollywood acts in the past disappeared from the scene only to suddenly resurface as preachers.

There are a number of them including, Liz Benson, Zack Orji, Eucharia Anunobi among others.

In recent times, we’ve also had a few of claim to have God’s calling on their lives to be ministers of the Gospel.

Below are three of them:

In March 2022, Veteran actor Richard Mofe-Damijo (RMD) opened up on a pastoral call on his life which he has been running away from.

He narrated via an Instagram post how several persons always shared their dreams where they saw him as a pastor.

RMD confessed to have willfully avoided the pulpit for many years after having taught in Sunday school for over 15 years but noted the call always has a way of seeking him out in movie roles.

The 60-year-old thespian asked fans to look out for him in the movie, “Cold” where he once again plays the character of a man of God.

RMD wrote: “True Story! There was a time when for every other day or week, somebody would tell me they had a dream where they saw me as a pastor. Having taught Sunday school for over 15 years it was not far-fetched.

“Besides every perceived Bad Boy is supposed to end up in full time ministry right? So, what did I do? Run!

“I’ve avoided the pulpit with trepidation. But just like Jonah, I continue to end up somehow in the belly of the calling where I have played a pastor or reverend father more than anything else in my acting life.

“God does have an amazing sense of humour. I’m not even sure as I write this if I’ve fully escaped the CALL!

“Until date I still frighten myself every time I’ve had to speak in a church because when I take the pulpit, the Holy Spirit takes over.

“And so once again I embark into a world of make believe where I play yet another man of God. I invite you on this epic cinematic journey into the spirit realm!”

The second on this list is the youngest son of legendary actor, Peter Edochie, Yul Edochie aka Ezedike.

On November 3, 2022, the popular actor declared he has the calling to be one of God’s preachers, emphasizing that he’s been called to the servitude of God

The movie star, who recently took a second wife, Judy Austin after welcoming a son with her made this known in a viral viral

Yul speaking about his ‘divine’ calling to pastorage, claimed he’s had for actually a long time but has always thought it just wasn’t the right time to fully embrace it.

“I’ve had this calling a long time ago actually, many years ago. But I always felt maybe the time hadn’t come, the time wasn’t right,” he said

In another video shared two days later, while reaffirming God’s call on his life, the movie producer also recounting a near-fatal motor accident he was involved in, in 2019 said: “Immediately the accident happened I heard a little voice say, “Yul it’s over, anything you had to do that you didn’t do, it over.

“But suddenly, I felt life come into my body after the car stopped somersaulting. My legs moved, life started coming back to my body and I realized I’ve been given second chance.

“Now, I know why I’ve been given that a second time at life which is to preach the message of God to the world.”

He captioned the video: “I’ve found my purpose on earth. And I’m happy I did.”

The actress-turned-politician who in June emerged as the deputy governorship candidate of the African Democratic Congress (ADC) in the forthcoming 2023 general election in Rivers State is the third on the list.

Only a few days ago, right after Yul ‘public announcement’ Dikeh’s interview with media personality, Chude Jideonwo surfaced online where she also claimed to

During the interview, Tonto claimed she has a pastoral calling, explaining she has always desired to be one.

The 37-year-old, who recently announced that she was officially ‘kissing acting good bye’, stated the profession alongside entertainment as a whole was basically opportunity-based.

On the pastoral calling, Dikeh noted she may yet embrace it ‘depending on where God wants to take her’.

“I’m an opportunist with this thing called acting or entertainment. But for God, He has ordained that step already. For me, I was just swimming in a swimming pool,” she said.

“I mean, I was a church girl going to be a pastor. I was supposed to be a pastor, I still might be. Depending on where God is taking me to.”

December 6, 2022
I only have awards on Wikipedia, TG Omori

I only have awards on Wikipedia, TG Omori