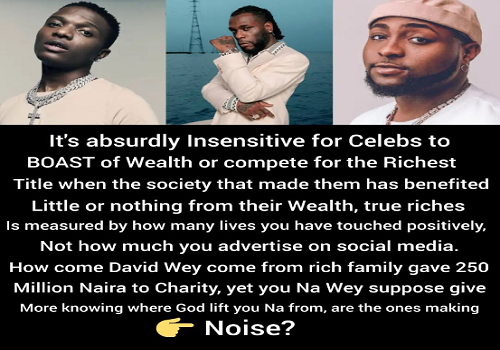 Controversial actor Uche Maduagwu has condemned the recent boastful remarks by Wizkid and Burna Boy over the wealthiest Nigerian artiste.
Wizkid sparked up what many termed unnecessary and childish when he made a Snapchat post claiming to be Nigeria’s wealthiest artiste.

He also claimed to be ‘everybody’s daddy’ referring to other artists as niggas while promising to offer them free tutelage on how they could make smart business decisions with guaranteed less work yet deliver everything deserving to them.

Burna Boy, who has always claimed same position, took to his insta story to knock Wizkid insisting he would discuss anything regarding money only with those that have made at least $100m this year.
Though, he had earlier slighted Davido when he referred to himself as the 30BG boss’ uncle in the music industry.

Reacting, Davido alleged Burna Boy signed a slave deal with his record label to ‘chase numbers and be bigger than Wizkid and him.

He noted Burna yet trails far behind Wizzy and him despite all of his attempts while stressing that till Odogwu quits music, he would remain bigger than him.

Appalled at the back and forth between the trio about affluence, Maduagwu described it as ‘absurdly insensitive’.

The Instagram actor argued their ‘boast of wealth’ was absolutely unnecessary particularly when they have not impacted society with it.

He applauded Davido for engaging in charitable acts compared to the others who have completely forgotten the society that made them successful despite having come from poor/middle-class backgrounds.

“It’s absurdly Insensitive for Celebs to BOAST of Wealth or compete for the Richest Title when the society that made them has benefited Little or nothing from their Wealth, true riches Is measured by how many lives you have touched positively, Not how much you advertise on social media”, he wrote.

“How come David Wey come from rich family gave 250 Million Naira to Charity, yet you Na Wey suppose give More knowing where God lift you Na from, are the ones making Noise?”

How I signed Wizkid, PSquare to make Afrobeats global – Akon

I’ll always be bigger than you, Davido replies Burna Boy