SATURDAY, October 29, 2022 will remain fresh in the memory of the Oyo State governor, Engineer Seyi Makinde, as well as football lovers in the State.

It was the day the city of Ibadan hosted an international match at the Lekan Salami Stadium after over two decades, and it turned out to be a memorable day for Nigerians.

The Olympic Eagles outclassed the Junior Taifa Stars of Tanzania 2-0 in a 2023 Africa Cup of Nations [U23] second leg qualifier, a result which sent Nigeria through to the final round 3-1 on aggregate where they will now face Guinea for the ticket to Morocco 2023.

Indeed, the superb state of the Lekan Salami Stadium including the facilities put in place aside from the playing turf, among other factors, enabled the Nigeria Football Federation (NFF) to consider the bid by the Oyo State government to host the game.

Thanks to the huge investment in the stadium by the Oyo State governor, Engineer Seyi Makinde, as the Lekan Salami Stadium has now become one of the best in the country. 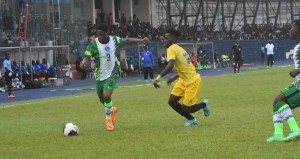 Makinde has always displayed his passion for sports ever before he became the number one citizen in the Pace Setter State via participation in golf and tennis aside from his philantrophy in sports.

After the refurbished Lekan Salami Stadium was commissioned on September 1, 2021, many sports enthusiasts had looked forward to watching an international game on the turf and the prayer was answered on October 29.

Recall the last time an international match took place at the Lekan Salami Stadium was in 1999 when the Flying Eagles settled for a barren draw incidentally with their Tanzanian counterparts.

Twenty-three years on, the stadium played host to Nigeria’s Olympic Eagles and it turned out to be a good day for Nigerian football.

On the eve of the match, Makinde lifted the morale of the players and their officials when he hosted them to a dinner at the Government House, Agodi.

An excited Makinde, during the dinner, doled out N10million to the Olympic Eagles and announced another largesse of $25,000 for the team, as he promised to be at the stadium to cheer them to victory.

“I am coming to the stadium with the cash; so, it is not a go-and-come back promise. I will give you the money,” Makinde was quoted as saying.

On the D-Day, fans trooped out en masse even from neighbouring states and the Salisu Yusuf-piloted side did not disappoint.

A goalless draw, having played a 1-1 draw in Dar Es Salaam, Tanzania, was enough to see Nigeria through but the Olympic Eagles after a goalless first half situation, came back in the second half to pump in two goals through Abiodun Ogunniyi and skipper Success Makanjuola.

Fans left the stadium in joyous mood as the East African opponents were left in lamentations of crashing out of the race to the Paris 2024 Olympics.

Unarguably, for a long time to come, the memory of the match would linger on.

No wonder, Makinde, a day after the match while speaking at the closing ceremony of the seventh Seyi Makinde Women Support Pro-Invitational Amateur Golf tournament, savoured the joy of breaking the jinx against hosting international football in Ibadan after over two decades. 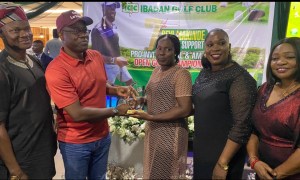 “For the first time in over 20 years, we hosted an international competition here in Ibadan at the Lekan Salami Stadium, where Nigeria beat Tanzania 2-0,” an elated Makinde proudly told the audience at the Ibadan Golf Club arena.

The match also brought a lot of joy to the people in Ibadan as it boosted some businesses before, during and after the game.

Head coach of the Olympic Eagles, Salisu Yusuf, speaking during the post-match conference, also acknowledged the invaluable role played by the Oyo State’s helmsman which, he noted, gingered his team to success.

“Camping in the ancient city of Ibadan was a blessing to the team.

“We are grateful to Governor Makinde for his hospitality, he stood behind us and we really appreciate his kind gesture of hosting the team and boosting us as well with cash incentives. In fact, Ibadan is our home and we hope to explore this oppor- tunity of coming to a place that is suitable for us,” Yusuf, a former Enyimba coach had said after his team’s qualification for the final round of the AFCON U23 qualifying series where they will now face Guinea following the withdrawal of Uganda.

The hosting of the match to the state’s Commissioner for Youth and Sports, Mr Seun Fakorede, was an unforgettable moment, as he expressed hope that the newly-refurbished Lekan Salami Stadium will host more international matches in the near future.

“We must thank Governor Seyi Makinde for the gesture for allowing CAF approval for the stadium to host an international match.

“I also laud the fans who conducted themselves well and cheered the team to victory,” Fakorede, who watched the game at the stadium alongside Governor Makinde told Sportingtribune.

The Olympic Eagles, since October 7 before the first leg in Dar Es Salaam, were camped in Ibadan and trained at the Lekan Salami Stadium in order to get accustomed to the pitch, thereby creating a business opportunity for food and drinks vendors to explore for about four weeks when the return leg tie was played.

Some fans were seen at the stadium as early as 10:00am in readiness for the game as souvenirs, food and drinks vendors were already on the ground to make business.

Fans were well-mobilised for the game while buying of tickets from the designated areas was smooth.

Gaining entry into the stadium by tickets-carrying spectators and journalists with accreditation tags was without any hitch; as the security personnel within and outside the stadium ensured orderliness.

Indeed, the hosts, the Oyo State Football Association and the Ministry of Youth and Sports ensured no stone was left unturned to make the day a memorable one for the sports-loving Governor Makinde and fans, while the Olympic Eagles equally put the icing on the cake with a 2-0 victory.