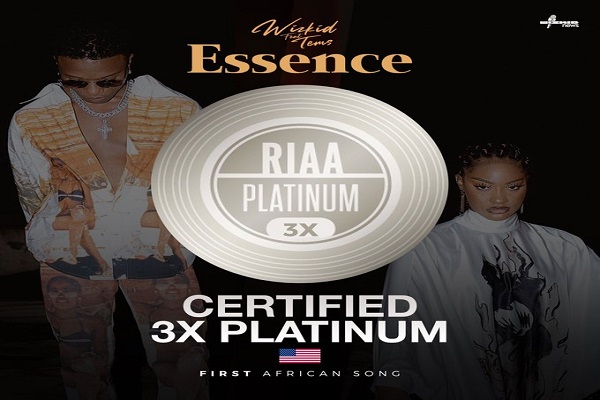 This feat is coming at about the same time when the singer released his highly anticipated fifth album titled ‘More Love, Less Ego’.

Essence’ is a track from ‘Made in Lagos’ and since its release, the song has continued to break numerous records in the global music.

In July 2021, the project became the first Nigerian song to crack the Billboard Hot 100 as well as the third from Africa.

Read Also: If I make gospel album, it’ll be played in clubs too – Wizkid

Four weeks after, ‘Essence’ recorded another leap, climbing by 23 spots on the Hot 100 to hit 59th place.

The ‘Fever’ crooner recently said he wants to be remembered like Bob Marley, the late Jamaican music icon.

“I have one other aim for this new chapter, to live forever. Not physically, but for whatever I create to live forever,” he stated this while speaking about a musical for Bob Marley’s ‘Get Up, Stand Up!’.

He said: “Yo, we were watching a Bob Marley play and this guy died decades ago. I didn’t even know that he died at 36. He did so much at a young age.

“It just reaffirms what I do; I have to keep taking this to the highest heights. Because I know one day, they are definitely going to create a play about me.”