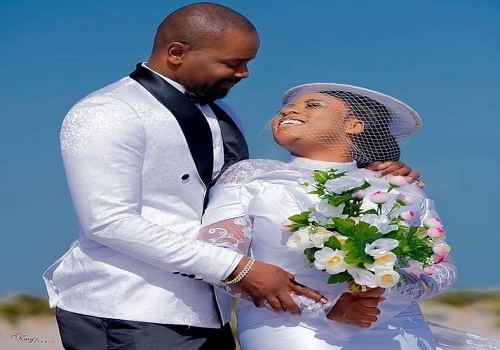 The nine-month-old marriage of Jasmine, daughter of popular actor, Mr Ibu has crashed over what she described as a ‘tiny lie’.

Jasmine, via series of posts on her Instagram page on Monday, announced the end of her marriage to her hubby, MD.

Captioning her wedding photo with the words: “The End”, Jasmine accused her hubby of having lied to her about his previous marriage, divorce and kids.

She claimed MD never mentioned to her that he was a divorcee with three grown kids until she found out from his mom.

Jasmine confessed the nine months spent with her hubby were the best so far in her life but vowed never settle to for a ‘tiny lie’.

Though she stated she was filing for a divorce from her hubby as the ‘tiny lie’ hurts deeply, she vowed to love forever, urging people to keep their advice to themselves as she doesn’t need public opinion on the matter.

She wrote: “This was the best nine months of my life! I have no regrets whatsoever! I just won’t settle for a lie regardless! I forgive easily, I remember asking you about this severally before we started!

“Finding out today from your mum really broke me! A foundation built upon a tiny lie won’t stand!

“I love how you loved me! But hate how you never mentioned your divorce or kids to me! Moving on I don’t think I want anybody else! Just gonna love you from a distance!”

“My marriage was so beautiful and full of love, my husband literally worshipped me. I don’t know if anyone is ever going to love me like he did! But this one lie! I can’t forgive. I have filed a divorce today!

“I found out today that he has three grown-up girls! 3. Never told me he was married and divorced.

“Yes he’s divorced but still doesn’t change anything! I married a single loving husband! I won’t settle for less!

I don’t owe anyone explanation!! Don’t ever lie about your age for any reason! I love you MD.

“I posted this because I know, you will do everything to make sure we reconcile! I want so badly to spend forever with you! I do! You are perfect in your love! But no! Not with this tiny lie! I would have still married you if you had told me! I would have!

“Now I can’t trust you no more! That hurts! I don’t need anyone to advise me on anything! I love my husband forever! But I can’t forgive this lie.

“F*ck anyone that has anything to say! If I ever feel the need to forgive and forget! I might reconsider my decision!

“But until then! I will love you from a distance! I feel the love! But the hurt is more. It was so beautiful! It was so perfect until it was a lie.”