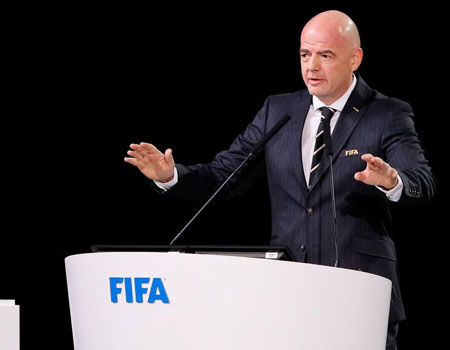 FIFA president, Gianni Infantino, has urged the 32 nations preparing for the most political World Cup in the modern era to focus on the game in Qatar and avoid handing out lessons in morality.

A letter imploring teams to “let football take center stage” was sent by Infantino and FIFA secretary general Fatma Samoura ahead of intense media focus on coaches and players when World Cup squads are announced next week.

“Please, let’s now focus on the football!” Infantino and Samoura wrote, asking the 32 competing federations to “not allow football to be dragged into every ideological or political battle that exists.”

Qatar was picked to host the World Cup in 2010, sparking scrutiny ever since regarding the country’s treatment of low-paid migrant workers needed to build projects costing tens of billions of dollars and its laws criminalizing same-sex relationships.

Eight European teams have committed to

their captains wearing heart-shaped armbands — in breach of FIFA rules — to support an anti- discrimination campaign, while several coaches and federations have backed calls to create a compensation fund for migrant workers’ families.

Denmark, usually in red, will wear all-black jerseys as a sign of mourning for those who died in Qatar.

Meanwhile, Iran, who are drawn in Group B alongside England, United States and Wales, have also faced calls to be removed the World Cup, which begins on November 20.

Iranian fan groups have called for the country’s federation to be suspended for discriminating against women, and Ukraine football officials asked FIFA to remove Iran from the World Cup for human rights violations and supplying the Russian military with weapons.

“We know football does not live in a vacuum and we are equally aware that there are many challenges and difficulties of a political nature all around the world,” the FIFA leaders wrote in the letter on Thursday, although they did not address or identify any specific issue.

“At FIFA, we try to respect all opinions and beliefs, without handing out moral lessons to the rest of the world. One of the great strengths of the world is indeed its very diversity, and if inclusion means anything, it means having respect for that diversity.

Infantino and Samoura added: “No one people or culture or nation is ‘better’ than any other. This principle is the very foundation stone of mutual respect and non-discrimination. And this is also one of the core values of football.

They repeated long-standing promises made by

Qatar, including by its emir at the United Nations general assembly in New York in September, that all visitors to Qatar will be welcome “regardless of origin, background, religion, gender, sexual orientation or nationality.”

Around 1.2 million international visitors are expected in Qatar during the tournament.