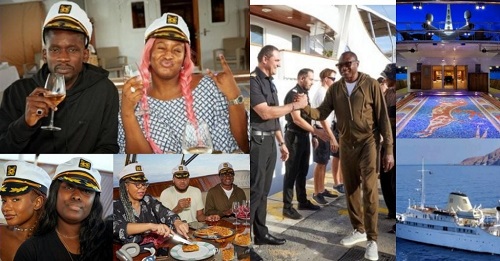 In one, he was filmed boarding the super yacht with his family members and son-in-law-to-be, singer Mr Eazi as he introduced them to the yacht’s crew.

He was said to have splurged €3million to rent the Aristotle Onassis’ Christina O, a 325ft luxurious motor yacht belonging to one of his childhood idols.

Commenting on her father’s ‘luxurious’ expense for his 60th birthday celebration, Cuppy hailed him for his selflessness.

She explained as a young boy, her father nurtured the hopes of someday visiting the ‘super-yacht CHRISTINA O’ owned by his role model Aristotle Onassis, a Greek shipping magnate who was once regarded as the world’s richest man.

The entertainer applauded her dad for not having given up the pursuit of his dream which has eventually manifested while urging others to emulate him.

She wrote: “My father @realFemiOtedola always dreamt to visit the super-yacht CHRISTINA O owned by his role model Onassis.

“And now at 60 he has chartered it for next 3 weeks to share with his loved ones! This is what love looks like #FamilyFirst

“Chase your dreams, you never know… “