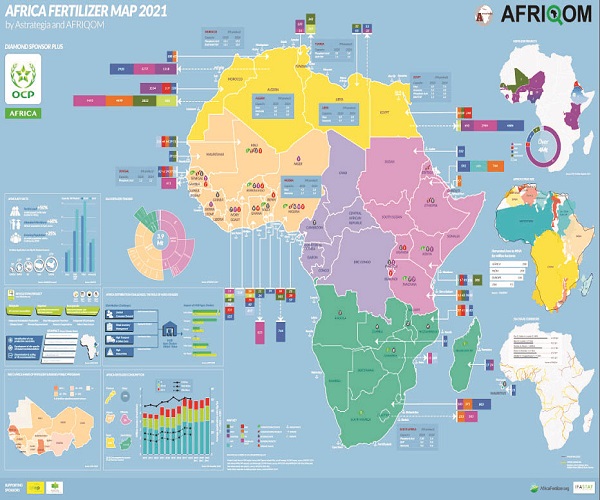 African fertiliser industry is one of the strategic sectors of the continent This year, the sector has witnessed many expansionary projects, including installation of new production units.  Mega fertiliser projects infrastructure creation  across the length and breadth of the continent have been led by public and private sectors, DANIEL ESSIET reports.

The agric sector has recorded an upbeat outlook for fertiliser sector, with a number of ongoing and planned projects expected to increase production capacity, especially for nitrogen fertiliser.

For analysts, the expansion of fertiliser infrastructure over last few months has been epic. It has been on the boom with more projects executed and underway. The sector has been achieving progress from the beginning of this year which increased activities.

This year, analysts said the fertiliser industry would make $57 billion in profits. One reason for this is the shortage created by the Russian and Ukraine war.

According to Mordor Intelligence report, Africa Fertiliser Market stood at $ 9.45 billion this year. The report noted that the pace and diversification of Africa’s food needs may require  farmers to increase agricultural production and yields, which is anticipated to boost fertilizer demand.

It also added that most of the soils in Nigeria are generally light textured and low in cation exchange capacity (CEC) which develops calcium deficiencies thus increasing the fertiliser demand.

On the whole, the soaring fertiliser prices have also led to an affordability problem for farmers, who are unable to purchase expensive fertilisers. To mitigate this, African Development Bank (AfDB) launched a bold $1.5 billion African Emergency Food Production Facility.

Speaking during YARA’s Knowledge Exchange Event in Oslo, Norway in September, President, AfDB, Dr. Akinwumi Adesina intensified the call to empower small-scale farmers and give them access to improved soil that would increase yields, fertiliser and markets to enhance their incomes and well-being.

He noted that no agenda was more important now for Africa than food security.  To this end, AfDB has been working with Norway, YARA and other partners, to drive zero hunger in Africa.

He said African Fertiliser Financing Facility (AFFM), managed by the bank, has been working with YARA, and is showing impressive results through its credit guarantee facility.

The  bank is  working with YARA to roll out of digital platforms to support electronic vouchers (such as the E-wallet system that helped to provide 15 million farmers in Nigeria with smart farm input subsidies in 2011-2015) to boost farmers’ affordability of fertiliser.

In Nigeria, the project has secured a leverage of 4.6 times the guarantee and facilitated access to financing for fertiliser blenders who traded fertilizer worth $11.2 million.

Besides this, many countries have  made  progress in identifying and unlocking policy and regulatory bottlenecks critical to using fertiliser to  boost agriculture sector growth. These included Ethiopia,  Ghana, Burkina Faso, and Nigeria. They have strengthened their legal systems to enable private sector involvement in the seed and fertilizer sectors. Notable, private sector partners  made investments to improve availability and affordability of high quality fertilizers, strengthen competitiveness of local famers, thereby creating jobs and enhancing food production. Indeed, fertiliser manufacturing are on the rise in Africa. Companies such as Dangote, Yara , Israeli fertiliser group ICL   OCP,  have invested billions of dollars expenditure on expansion and new production facilities. This is apart from   ongoing  mini-plants, providing cost-affordable, green-made fertilisers to local small-scale farms.

The $2.5 billion Dangote urea and ammonia fertiliser plant was inaugurated by President Muhammadu Buhari in Lagos. The factory sits on 500 hectares (1,235 acres) of land on the outskirts of Lagos and has a capacity to produce three million metric tons of urea yearly, making it the second largest plant in the world.

The President, Dangote Group, Alhaji Aliko Dangote, said the plant could earn the country $5 billion in export revenue each year.

Also, OCP Group  inaugurated the first modern fertiliser blending plant in Kaduna. The aim of the facility is to assist Nigerian farmers in enhancing and increasing soil yields in order to attain food security.

The Deputy Managing Director, Programme Incubation for West Africa, OCP Africa, Caleb Usoh, said the fertiliser complex would  deepen the use of standard fertilisers by farmers.

He said the industrial complex was going to have multiple plants, including the ammonia plant that converts natural gas to ammonia.

“At the complex, we will convert natural gas and make the end product to become another thing. The facility is also going to be having a jetty of its own for fertiliser export.”

According to him, much has gone in towards the  development of soil experimental data and laboratory to help farmers and stakeholders to make informed decisions.

He stressed that improving fertiliser recommendations for farmers was essential to increase food security for smallholder farmers.  OCP’s investments in fertiliser plants are  in Ethiopia, Rwanda, Cote d’Ivoire, Kenya, Tanzania and Nigeria.

YARA Chief Executive Svein Tore Holsether launched its Sustain Africa initiative to support Africa to produce food on seven million acres, support 1.6 million farmers, to produce staple food crops, and tackle some of the fallout of the effects of the Russia-Ukraine war on food security in Africa.

SustainAfrica is also strengthening local supply chains for agricultural inputs and has established a partners’ network that can be leveraged for future crisis responses on fertilizers.

This has provided more than 30 per cent price relief for about 20,000 metric tonnes of fertiliser, supplied by YARA and the Export Trading Group in Uganda.

Last year, the company signed s a memorandum of understanding (MoU) with  OCP to promote sustainable development and the fight against climate change. Under the agreement, the parties will offer funding to support sustainability programs and research at Morocco’s Mohammed VI Polytechnic University (UM6P) and Israel’s Ben Gurion University of the Negev (BGU).

The partnership also seeks to allow scientific and technical experts from UM6P and BGU to collaborate on sustainability initiatives and to build an agenda of different events, including seminars, symposia, and workshops. BGU President Daniel Chamovitz said, “BGU and UM6P have much in common. From their desert settings to their focus on applied research and innovative teaching methods, the two universities are well suited to collaborate on projects in sustainability and climate change.”

The new information tool is a joint effort by the Food and Agriculture Organisation of the United Nations (FAO) and the International Fertiliser Association (IFA), in collaboration with top scientists and experts at the University of Maryland Center for Environmental Science, the Swedish University of Agricultural Sciences, CEIGRAM-Universidad Politécnica de Madrid, Wageningen University & Research, the University of Nebraska and the African Plant Nutrition Institute.

The Cropland Nutrient Budget is a new data domain of FAOSTAT, the world’s largest portal on food and agriculture statistics, serving as a global public good allowing member states and all stakeholders in the world’s agrifood systems to peruse harmonised data on production, trade and consumption – and now the flows of nitrogen, phosphorus and phosphate, the three major plant macronutrients needed by crops to thrive.

Fitch, a research firm said in a recent report that Egypt’s fertilizer sector will continue to increase between now and 2025. It listed Investments in nitrogen fertiliser boosting output to include the new fertiliser complex built by Thyssenkrupp for El Nasr Company for Intermediate Chemicals (NCIC), a contract signed by Dutch fertiliser plant developer Stamicarbon with Abu Qir Fertilisers to revamp one of their urea melt plants, expected to be operational in 2025.

Egypt also occupies fourth place in the world among the largest exporters of urea fertiliser with a quantity of around 4.5 million tonnes annually, which represents about nine per cent  of the total amount traded globally.

This year, African Fertiliser and Agribusiness Partnership and Fertiliser Canada agreed to work to boost growing potential for rural farmers in sub-Saharan Africa.

The African Fertiliser and Agribusiness Partnership (AFAP) and Fertiliser Canada  launched a new initiative to support smallholder sub-Saharan African farmers, particularly women and youth. The planned interventions will see a marked improvement in socio-economic well-being and income earning potential for over 80,000 smallholder farmers in Ethiopia, Ghana, and Senegal. However, there was 189 per cent increase in costs for the key imported fertilisers. The high cost of natural gas, along with the disruption of exports from Russia and Ukraine due to the ongoing crisis, has caused prices for chemical fertiliser to double and, in some cases, even triple in the last two years.